With over 20 years of professional culinary experience, Kenny rose to fame in 2010 as one of the fan favorites on season seven of Bravo's <em>Top Chef</em>. 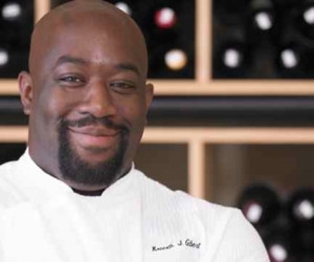 With over 20 years of professional culinary experience, Kenny rose to fame in 2010 as one of the fan favorites on season seven of Bravo’s Top Chef. Since then, he has cooked for the likes of Oprah Winfrey, Gayle King, Stedman Graham, Samuel L. Jackson and A.J. Calloway, just to name a few. Kenny began his culinary career in Jacksonville when he took a position at The Ritz-Carlton Hotel Company as an apprentice in the garde manger kitchen of their Amelia Island property. Kenny worked his way up to Chef de Cuisine at the age of 23 at the Ritz, helping to consistently secure the AAA Five Diamond Award for the property during his tenure. He would then set about, cooking in restaurants in Naples, Sea Island, Jupiter and Telluride, before returning to Jacksonville to open Nippers Beach Grill, where Folio Magazine named him Chef of the Year. Next up was Miami, where Kenny served as the Corporate Chef at the James Beard nominated Yardbird Southern Table & Bar and Khong River House. Now back in Jacksonville – third time’s a charm – UK is Kenny’s first solo venture with his wife/partner Anna. In addition to the restaurant, Kenny has a line of spices, Chef Kenny’s Spice Blends, which will also be available for purchase at the restaurant, and at the Fernandina Beach Market Place farmers’ market.

“I’m excited to be back in the Jacksonville area – besides spending a considerable amount of time working here throughout my career, I am also not far from my family’s roots in St. Augustine which feels good,” said Kenny.

While UK will feature a daily seasonal menu based on the best local produce availability, there will also be weekly specials celebrating a particular region or cuisine from around the world, showcasing Kenny’s diverse international cooking style. Upcoming special themes include: Italian, Asian, Mediterranean, India, Caribbean and Latin Cuisines. In addition to the international specials, UK will also serve as a culinary think tank for traveling, young and visiting chefs from around the country to demonstrate their talent. Unique guest chef dinner events will be offered up on a monthly basis on Mondays, and will be ticketed for an all-inclusive price. “In addition to being excited about my first solo venture, I want to make UK a place for young and talented chefs to come learn and experiment – helping to support developing talent is so important to me as a seasoned chef,” said Kenny.

All of the dishes at UK are intended to be shared, and will come out of the kitchen as they are ready. Menu highlights include: BBQ Alligator Ribs with Carolina Gold Rice Porridge, Citrus Mop, Padron Peppers and Brussels; Magret Duck Tasso Ham with Pickled Pineapple, Anise, Mustard Leaves and Country Bread; and Smothered Organic Chicken and Dumplings with Green Beans, Carrots and Sage. Kenny’s famous Fried Organic Chicken will also be available daily, served with house made Datil Pepper Hot Sauce, Drop Biscuits and Greens. Collards, Hoppin John, Mac and Cheese and Cheese Grits will all be offered as a side, while desserts include: Coca Cola Chocolate Cake with Sour Cream Chocolate Icing and Dried Cherry Preserves; Yam Turnover with Buttermilk Glaze, Blackberries and Cracked Pepper; and Banana Fosters Parfait with Gingersnap Cookies. Seasonal sangria’s and mimosas will be available, as will craft beers, including People’s Pale Ale, I-10 IPA, Kings Street Stout and Jon Boat Coastal Ale from Intuition Ale Works, all by the can. A selection of international and domestic wines will be available by the glass or bottle, as will a rotating list of wines and beers brought in to complement each of the weekly international menu specials.

UK will serve brunch on the weekends, with a live trio band, and will also offer a special BBQ Express lunch on Fridays only, teasing one of Kenny’s next concepts scheduled to open late this summer, Gilbert’s Big Oak BBQ Shack. The BBQ Express Lunch menu will feature items like Deviled Egg Parfait with Tasso Ham Vidalia Onion Jam, Redneck Caviar and Country Bread; Fried Fernandina Beach Shrimp Po Boy with LTO, Charred Jalapeno Tartar Sauce, Organic Leaves and Lemon Dressing; and Meat and Three: Smoked Spare Ribs with Beans, Slaw, Greens and House Garlic Texas Toast. Off-site catering will be available starting in the fall, and will be available for events ranging in size from 25 – 500 guests.

The interior of UK evokes old-fashioned meets modern southern. Throughout the space, antique elements and touches are on display, including enameled cooking pots, milk jugs, old railroad signs, reclaimed wood window pains, burlap curtains and more. The restaurant has three main sections, totaling about 62 seats: The Safe House Lounge, Muscadine Hall and Datil Pepper Park. The Safe House Lounge offers guests a place to relax over a glass of wine and some small bites in the comfort of a love seat or decorative chairs, while Muscadine Hall offers the more traditional table and chair setup. Datil Pepper Park is the outside patio and will be open year-round, with a fire pit and heaters in the winter. The Park will also house a pepper and herb garden, which the restaurant will source from.

Gilbert’s Underground Kitchen will serve dinner Wednesday – Monday, 6PM – 10PM; BBQ Express Lunch on Fridays, 11AM – 2PM; and Brunch on Saturdays and Sundays, 10:30AM – 2PM. The restaurant will be closed on Tuesdays. UK is located at 510 S. 8th Street, Fernandina Beach, Fl 32034.