Crist Brings Jim Morrison Back into the Limelight

Editorial, In the News, News, Opinion

Crist should have given Morrison's Pardon more attention in 2007, explaining why it would be the right thing to do. Now it smells like teen spirit. 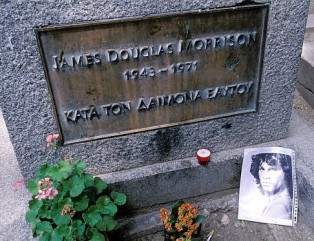 In a couple of weeks Jim Morrison would have turned 67, had he been alive to celebrate that birthday. Instead Jim died in Paris, France in the early morning hours of July 3, 1971, now almost 40 years ago.

Morrison’s conviction in a Miami Courthouse in 1971 has now been brought back into the limelight by parting governor Charlie Crist, who wants to pardon the Doors frontman for his conviction to a $500 fine and 6 months in jail for allegedly exposing himself at a 1969 concert at the Dinner Key Auditorium in Miami, a conviction he was appealing at the time of his death.

When the newsmedia informed us about this last week, nobody seemed to remember that Crist already suggested a possible pardon for Florida’s Native Son Morrison more than 3 years ago saying there were no photos or video that could prove the allegations and no witnesses who could say with 100 percent certainty that the singer exposed himself.

Jacksonville.com, the internet arm of the Florida Times Union, posted the story a full day after it appeared on theHuffingtonPost.com and what’s more, the entry was an exact duplication . From USAToday to ABC News and every medium in between in the meantime has jumped on the bandwagon of the Morrison case, as if 1969 was a timeframe of clear and lucent memory in most people’s minds, let alone for us who were alive and in proper performance mode.

What’s clear to me more than 40 years later, is that this revival, as much as the original court case, was never about the truth.

This was all about opposing lifestyles, ideology, politics and shifting power. This was establishment fighting back the changes, for what they believed in with all the weapons they could find to make the case; obviously a situation where TRUTH quickly becomes an interpretation of PERCEPTION.
Rock performers such as Morrison, John Lennon, Mick Jagger and the Rolling Stones, Hendrix, Led Zeppeling were “controlling” huge masses of force through Rock & Roll and the establishment was getting scared. The Vietnam protests, the barricades in the streets of Paris, the invasion of Prague, the birth ground of domestic terrorism, the IRA against the British crown; as forces against perceived global injustices. It was the birthground for Amnesty International and it created pockets of unrest. Superstars like Morrison, Jagger, Hendrix and Lennon had the possible ability to ignite anarchism on a grand scale. At the time of the Coconut Grove “incident” the Doors were America’s number ONE band. 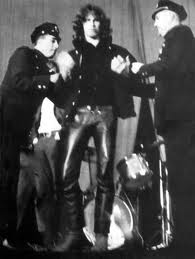 Morrison had a problem with authority

When Woodstock happened in August of 1969,  a dozen or more stories and twists were invented why Morrison and the Doors were not present. The Miami charges had cancelled out their tour schedule and they could have been an enormous attraction on Woodstock. But Morrison in front of half a million love and peace music fans, could have been a lighted match in a drum of kerosine. The same reason why none of the other Superstars of Societal Discontent showed up. Lennon wanted to play Woodstock, but the rest of his Beatle band said no and when he offered the Plastic Ono Band instead (a band with a highly anti-establishment message ) the organizers turned him down. The Stones could have made a detour in their US tour schedule and play Woodstock, but with their former founder bad boy guitarist Brian Jones dying on July 3rd, 1969 – to the date 2 years before Morrison, Mick was in a combative mood, not suitable for Love and Peace.

Between the years of 1969 and 1971 the morbid 27 Club was formed with the successive death of Brian Jones, Al Wilson from Canned Heat, Jimi Hendrix, Janis Joplin and Jim Morrison. Many of the movements and changes of the sixties died with these star performers, as society restored its power over the non conformists. The 27 Club has some 34 members, reaching from Blues great Robert Johnson to Grunge Great Kurt Cobain. As an entity they could not , would not and should not fit into the structural harness of society. They were (and are) there to teach us “how to break on through to the other side” when society as a whole is veering off into a wrong direction.

Jim Morrison had a reported IQ of 149; he was a Navy offspring, moved around so often in his formative years, that stability became a strike-thru entry in his dictionary.
To illustrate why stability was unknown it should be noted that Morrison was born in Melbourne Florida in December of 1943; he had a sister, Anne Robin, who was born in 1947 in Albuquerque, New Mexico; and a brother, Andrew Lee Morrison, who was born in 1948 in Los Altos, California.
With his father a career officer in the United States Navy, Morrison’s family moved often.

I have always been thought by my parents to not judge anyone unless you have maybe walked a bit in their shoes.
Jim Morrison’s shoes were deformed and formatted by the way he came into this world. For as much as you want, understand that his feet were anchored into the signs of those post Worldwar II times with the Cold War escalating and Southeast Asia on the road to ignition.

Jim’s father George Morrison was born in Rome, Georgia and raised in Leesburg, Florida. He entered the U.S. Naval Academy in 1938. He graduated in 1941, was commissioned an ensign in the US Navy, and was sent to Hawaii where he was assigned to the minelayer Pruitt (DM-22) at Pearl Harbor, just in time to witness the Japanese attack on December 7, 1941.
In 1943 he returned to Florida and studied flight training at NAS Pensacola, Florida, commuting to Melbourne on the other Florida coast where Jim was born on December 8 of that year. Morrison the Elder graduated in the spring of 1944 and flew missions in the Pacific Theater for the duration of World War II. Those were Jim’s early years. 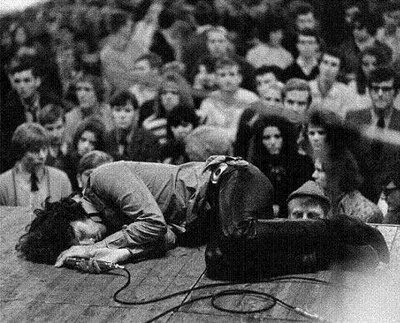 He loved to mimick living theatre...

After the war, dad became an instructor for secret nuclear-weapons projects in Albuquerque New Mexico and during the Korean War, he was assigned to the joint operations center in Seoul, earning a Bronze Star for his part in combat operations against North Korean and Chinese forces. By that time young Jim is about 10 years old with no dad around to help raise him, living mostly in and around the San Diego area. In 1958, Morrison attended Alameda High School in Alameda, California. He graduated from George Washington High School in Alexandria, Virginia, in June 1961. Morrison went to live with his dad’s parents in Clearwater, Florida, where he attended classes at St. Petersburg Junior College before transferring to Florida State University (FSU) in Tallahassee in 1962. His father was stationed at Mayport Naval Air Station in Jacksonville, Florida, from where he started moving up the ranks quickly.

In 1963, when Jim was 19, Morrison Senior took command of the Essex-class aircraft carrier Bon Homme Richard (CV-31), flagship of the Pacific naval fleet. Morrison was in command of the fleet during the Gulf of Tonkin Incident in 1964, which resulted in the escalation of the Vietnam War. His son Jim in the meantime completed his undergraduate degree at UCLA’s film school and the Theater Arts department of the College of Fine Arts in 1965.

In 1966 senior was promoted to rear admiral; at age 46 he was the youngest person to attain such rank. In a twisted irony of life Admiral Morrison was the keynote speaker at the decommissioning ceremony for Bon Homme Richard, his first ship as an admiral, on July 3, 1971 in Washington D.C., the same day his son Jim Morrison died in Paris, France at the age of 27. That’s how far the father and his oldest son had come undone over 27 years.

In 1992 Rear Admiral Ret. George Stephen Morrison, placed a flat stone on the grave of his son, buried in Paris France, that bears the Greek inscription: ΚΑΤΑ ΤΟΝ ΔΑΙΜΟΝΑ ΕΑΥΤΟΥ, literally meaning “according to his own daimōn”. Some have quoted his father saying that Jim “created his own demons” as the meaning, but the expression is usually interpreted as “true to his own spirit”. Maybe Morrison senior finally understood his son.

As stated in Morrison’s Biography “No One Here Gets Out Alive”, 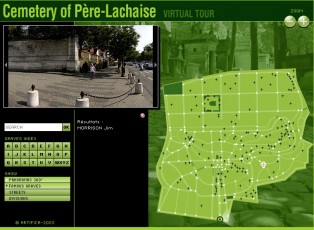 Buried at the Cemetery Pere Lachaise in Paris..... or is he?

Jim Morrison in all his complexity -singer, poet, philosopher, delinquent- the brilliant, charismatic and obsessed disciple of darkness, rejected authority in any form as he probed the bounds of reality, waiting to see what would happen.
At age 25 on that “fateful” night in Miami, Jim was not drunk enough to actually expose himself to the audience.
But in his mind he did, as he probed the bounds of reality.

If Charlie Crist wants to pardon Jim Morrison for an act of indecency that was never conclusively proven, in a cold war world scenario that was so paranoid that history books will never fathom the true extent, I’d say go ahead and make yourself feel better.
I think that Jim however will once again turn around in his grave, because a pardon is the forgiveness of a crime and the penalty associated with it. It is in no way a society admitting they did someone wrong by clearing him of all charges.

It’s up to society to figure out if we’re ready to convict on intention rather than fact. If we do, I don’t think Jim Morrison would want to be part of any type of pardon.