We kept fishing while I laid on the front deck. My head was over the side rail as I was bringing up everything that I had put in my system for at least the last year. 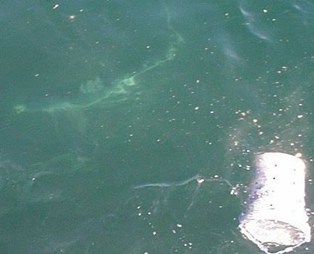 Jim, Robbie and I checked out early in the morning of the first day of fishing excited and hoping for a good day. We were able to get some live bait almost immediately and headed offshore to our desired spot to do some slow trolling for the big one. The seas were a little rough this particular morning, 4- 5 feet, but nothing we could not handle. We had fished together in much worse than that before.

After many hours of rolling around while slowly trolling our bait, we decide to eat some lunch. Usually as soon as you start to eat a sandwich then you get to hear the greatest sound imaginable while fishing-ZZZZIIINNNGGGG- which means that something has taken one of the baits.

Unfortunately, we were able to eat in peace this time. Shortly after eating lunch my stomach started to feel queasy and I realized that the rolling seas and waves were making me sea sick. I had never been sea sick before but I knew right away that the feeling I was having had to be it. I truly hope you never experience this, and I now always take Dramamine before we go out every time even if it is going to be nice. I am not taking any chances!

When you pay money to be in a tournament you are not going to give up just because one person does not feel good, so we kept fishing while I laid on the front deck. My head was over the side rail as I was bringing up everything that I had put in my system for at least the last year. All of a sudden one of the lines got hit and I had no choice but get up and help take care of the other lines and drive the boat so Jim could fight the fish. We knew that we had a good size fish on the line giving me no choice by to try to forget about my sea sickness.

We finally brought this beauty to the boat and ended up placing second in the tournament. We will always believe that the special chum I added to the water had something to do with it. That‚Äôs our story and we are sticking to it!