History, In the News

On July 30, 1887, 125 years ago, the Fernandina (Beach) Police Department was established by ordinance by the City Council. 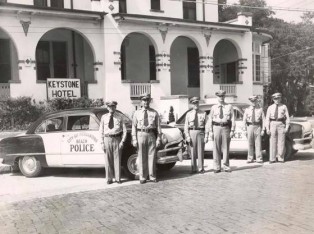 For most residents and visitors in Fernandina Beach, July 30th may have seemed like just another hot summer day. However, for members of the Fernandina Beach Police Department, the occasion was marked with a special celebration as the law enforcement agency quietly turned 125 years old.

On July 30, 1887, one-hundred and twenty-five years ago, the Fernandina (Beach) Police Department was established by ordinance by the City Council. John S. Lee was appointed as the first Chief of Police. The Rules and Regulations Handbook governing the “Police of Fernandina,” was adopted on August 17, 1887 and was just 15 pages long.

By passing the ordinance the Fernandina City Council established a “regular police force comprised of one police chief and no less than four patrolmen.” While the ordinance announced by Council President Fred Hoyt and approved by Mayor John Barr did not specifically state the duties of the police force, it did require the police chief to wear a uniform of navy blue yacht cloth with gold buttons and a gold badge. Patrolmen were required by the ordinance to wear a uniform of Middlesex navy blue flannel with silver buttons and a silver badge. All members were instructed by ordinance to wear a white helmet in the summer months and a black helmet in the winter months.

While some of the department’s history has been lost over time, an article in the local newspaper on March 17, 1891 noted that while the police department was not very large in weight or numbers, the members of the department had “plenty of grit.” The story recalls an encounter by Officer Courter of an unruly subject named Lewis Johnson. The officer attempted to arrest Johnson, but Johnson “defied the order to surrender and Officer Courter summoned assistance by blowing his whistle. Officer Starratt arrived on the scene and Johnson fought both officers, injuring Courter with a blow to the head and injuring Starratt by kicking him in the side. A crowd gathered but did not interfere as the officers eventually subdued Johnson and handcuffed him. As Johnson was brought under control, Chief Higginbotham and Officer DeFee, who had been on the other side of town when the melee broke out, arrived in time to assist in escorting Johnson to jail.” The newspaper closed the story by saying they were glad to note the efficiency of the City’s Police Force and it hoped that they may “continue to be a terror to evil doers.”

Like our City, we have a varied and colorful history. One significant and tragic incident occurred on December 8, 1930. While off duty, Police Chief James “Frank” Surrency responded quickly to the call of shots fired and within moments of his arrival was wounded by gunfire from the suspect, who moments earlier had shot and killed a young woman at his house. After mortally wounding Chief Surrency, he later killed another city resident while attempting to flee from responding officers. Meanwhile, Chief Surrency was transported to a Jacksonville hospital where he died from his wounds. Chief Surrency had served the City of Fernandina for more than 20 years and, at the time of his death, occupied both roles as the City Police Chief and City Fire Chief. He was just 43 years of age.

To celebrate the 125th anniversary of the Police Department, members of the department designed an anniversary badge. With tax dollars tight, it was decided that officers would be required to buy their own badge and could wear it on their uniforms from July 2012 until July 2013. What resulted was a unique design of the City Seal incorporated with both the flags of the State of Florida and the United States, and a banner announcing the 125th anniversary. The concept was so well received that some officers bought one badge to wear and another encased in plastic to display. At the end of the anniversary year the department will make a decision about whether to continue to wear the badges or retire them from service.

Today the Fernandina Beach Police Department is comprised of a Police Chief and twenty nine sworn members. Whistles have been replaced by radios and Middlesex navy blue flannel uniforms have been replaced by polyester. But the basic duties of the department have not changed much in the last 125 years, nor has our mission to protect lives and property and to serve the citizens of Fernandina Beach. Ours is an exemplary police agency and it is important to honor our history and heritage by marking our 125th anniversary with some visible sign of recognition. The new anniversary badge, coupled with our new police cars, seems entirely appropriate. We hope our community likes them as much as we do.