Just check the empty commercial real estate footage on Sadler Rd and you know that it's going to be a long hard recovery before we'll see full occupancy. 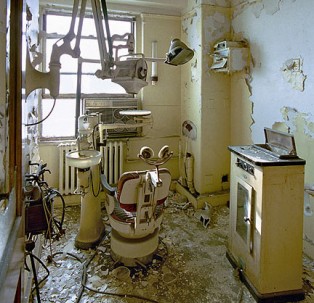 Commercial Real Estate is a wasteland

Following yesterday’s story on the Residential Real Estate Market I was thinking of giving a quick overview about the Commercial Real Estate Market in the current flip flop economy, when the word came in today that Basel 3 has been approved as a global set of regulations for the banking and financial institutions and we can now all rest safe and secure in the knowledge that banks are required to keep 8.5% of its balance sheet liquid(!?!) and won’t loan money to just any Thom, Dick and Harry.
And as a consequence I can now guarantee that as far as commercial real estate is concerned “fuhgeddaboudit” would be too much of a hope lifting expression, because this means that banks will be even less inclined to loan money than they have been in the past 2 years.

But, as we keep pointing out, a big part of the problem in the West is that we’ve been consuming more than we’ve been producing. That means that all these stores catering to unsustainable patterns of consumption and production are not going to have customers. They’re going to go out of business. Their buildings will be empty.
Now, at some point, there will be a bottom, when buying such commercial property will make sense, but I can’t tell you when that will be. We’ll have to keep tabs on the situation and look for a confluence of a number of factors, including interest rates, taxes, demographics, energy prices, politics… and jobs. It will happen, but I don’t know when, so at this point, I am completely uninterested in speculating in U.S. commercial real estate – and I don’t foresee being interested for at least five more years. I reserve the right to change my mind in selected locations, but I think it’ll be at least five years.

Now, that doesn’t mean that if I wanted a house, I wouldn’t buy it now. You can get a fixed-rate mortgage now with an artificially low interest rate on houses below the jumbo level (I think it’s about $550,000). Given where interest rates and the value of the dollars you borrow are going, that’s going to be a gift in the future. But fact here is that this is not a speculation. If you want to buy a house you like, to live in, the near term may be the best time EVER to buy.
And that will make sense, if only because that fixed-rate mortgage could be practically wiped out by the inflation to come. You’re looking at what could be a very large gift. Too bad for the entity that lends you the money, but that’s what they get for playing this government-rigged game.

Today you can buy real deals in Southern Florida, Nevada, California and many other ‘hotspots’ across the USA, but keep in mind that in many areas the bottom is not in yet and you have to like anything you buy enough to live in it if you have to. That’s the Golden Rule. If you’re not using that as a demarkation line you can find incredible deals anywhere in the world right now, like 500 acres of pure resorts in Africa or Greece or Portugal or Ft. Meyers. But keep in mind that if you do that, you may have to live there and run the place if it’s commercial, or it will most likely turn into a derelict property over time.

Just remember: hands off commercial unless you want to relocate a business to a better equipped and educated area. And for residential it may be too early to buy, unless you want it for personal use and get it with a big mortgage you can afford.