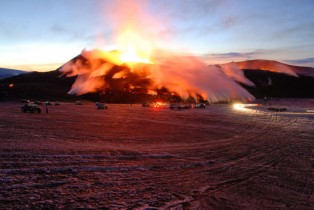 With Airlines around the world scrambling and screaming to get back into European Airspace, it becomes obvious that it is a fight between passenger safety and financial losses. With an estimated $200 million dollars a day in losses suffered by the combined airlines, the last five days of airspace closing in Europe has cost a good billion USD already.

And the culprit, a small volcano in Iceland nobody outside of Iceland had ever heard of before.
The Eyjafjallajokull Volcano, the name is probably the reason why all media outlets only refer to it as the Iceland Volcano, is sitting underneath a glacier of the same name and the volcano’s last major eruption happened almost 200 years ago in 1821 when a so-called “lazy” eruption went on slowly and continuously for two years. This actually may happen again and airlines may have to look for different approaches to the problem of getting back into business in Europe’s airspace.
The problem caused by a lazy (less powerful) eruption, and Eyjafjallajokull has that reputation, is that ashes don’t shoot high enough into the stratosphere to be of no real consequence for airplanes. But a lazy eruption is bad for air traffic as the plume of ice particle dust now tracks over Britain and North Central Europe in exactly the airspace corridor between 20,000 and 32,000 feet, air planes move in. Consequence is that most countries there closed down its airspace.
As I was thinking about Iceland’s recent economic and financial woes and how the country has been shunned by the “victims” of the breakdown of Iceland’s banking system, which are largely the same countries in Western Europe now being attacked by Icelandic Plume, I thought: Conditions are Rarely Ideal

Western European Airports are essentially closed, with reverse “War of the Worlds” type scenarios playing at major ports and speed train railroad stations, as British Prime Minister Brown, advises his stranded British flock on vacation in Spain, Portugal, Italy and Greece to find any means of transportation to get to major port cities, where her Majesty’s Royal Navy will provide secure passage back to England.

What a scenario!
Conditions are rarely ideal. Yet we all need to live and work around the conditions served, especially when they are served in such a majestic, all consuming manner.
If the “the Iceland Volcano” repeats its 1821 performance and keeps lazily throwing plumes of ashes into the major air traffic funnels, airlines will have to find different business models or find technological advancements to provide the safety customers require. Not only airlines suffer financial damage, so do airports, airport shops, import-export, tourism and trade and so much more.

Everyone Suffers to Some Degree

Even though the biggest financial damage is done in Western Europe, the US will have its fair share as well, especially in the high end perishable markets.
Wedding florists in New York are already worried about not getting plane loads of fresh flowers from Holland for example. They may have to truck them from Amsterdam to Madrid, where they would go on a Southern Atlantic route by plane to New York. And as wind patterns change over the summer months, the routes may have to change as well. Consequences are clear. Quoted pricing is out the window.
Conditions are rarely ideal.

Iceland’s banks upset the world financial flow (marginally) to the amount of $5.8 billion in 2008. Not a bad accomplishment for a nation that barely counts 300,000 people, but nothing major either on a global scale. With nature’s additional contribution from Eyjafjallajokull, we are looking at a potentially much more damaging scenario if the airlines alone already report $1 billion in losses over the past five days. If Eyjafjallajokull plans a similar pattern as in 1821, conditions will rarely be ideal for a long time.

Except for the tiny nation of Iceland, which attracts tourism in hordes since the volcano became active about a month ago, to see the splendor of this eruption against the background of snow, mountains and glaciers. At $400 per daytrip from capital city Reykjavik, the Icelandic economy may get a nice boost.
Oh and there is one other unexpected benefit from the ash plume. According to horticulturists in the UK, Ireland, the Netherlands and Belgium, the sulphur in the ashes, brought down by rain to the fields, will have a very positive growth effect on the crops.

Last but not least to show that conditions are never really ideal as things shift daily and can turn positivie or negative at any moment, there is a bigger worry smoldering in the background. Scientists say history has shown that when Eyjafjallajokull erupts, the much bigger Katla volcano nearby often follows within days or months.
Katla is located under the vast Myrdalsjokull icecap and an eruption could cause widespread flooding. The last major eruption took place in 1918, and vulcanologists say a new blast is overdue.

It’s Monday morning and it’s Springtime. Welcome to life on earth, it’s exciting, it’s promising and full of opportunities and it’s fragile and conditions are rarely ideal. It’s up to us to make the very best out of it.