I discussed this way of cooking corn with a group of friends and realized I was not the only one who had never heard of this before. 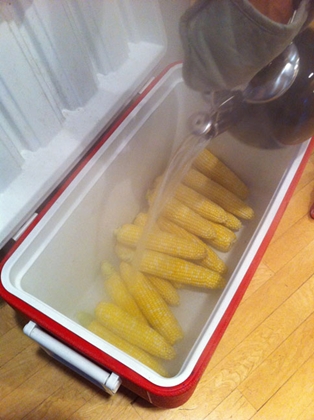 This is a wonderful recipe sent to me by my 91 year old grandmother. While snooping around the world wide web, this “tip” has been shared a gazillion times. After discussing this way of cooking corn with a group of friends, I realized that I was not the only one who had never heard of this before. So, I wanted to share it with you.

The original version of this forwarded email may have been published on ExperienceProject.com in the group, “I Like to Cook.”

“Am I the only person who hasn’t heard of “cooler corn”?

As an obsessive food nerd, you’d expect that I would have at least heard of it, but over the weekend I was blindsided by the simple genius of this method for cooking loads of corn on the cob perfectly.

I was turned on to it while visiting my family in Maine. Short story: We like corn on the cob. And with eight adults at the table, that means a couple of dozen ears. We would have used the lobster pot to cook them all, but the lobster pot was busy steaming lobster.

Then my sister, a capable Maine cook with years of camping experience says “let’s do cooler corn!” Before I can ask “what the hell is cooler corn?” a Coleman cooler appears from the garage, is wiped clean, then filled with the shucked ears. Next, two kettles-full of boiling water are poured over the corn and the top closed.

When we sat down to dinner 30 minutes later and opened it, the corn was perfectly cooked. My mind was blown. And I’m told that the corn will remain at the perfect level of doneness for a couple of hours.

Turns out, Cooler Corn is pretty well known among the outdoorsy set But for those of us who avoid tents as much as possible, it’s perfect for large barbecues and way less of mess than grilling. In fact, I may even buy another cooler just so I’m ready for next summer. Now that I’m in the know.”