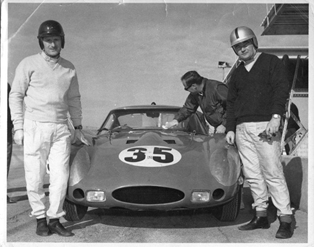 Trying to cast David Piper in a racing movie would be almost impossible. But Piper is a star in his own remarkable life. And he knows entirely too much about making movies. At the height of his sports car racing career David was part of the driving crew for Steve McQueen’s 1971 feature film Le Mans. An accident during filming cost Piper part of his right leg. But he did not stop racing.

While Piper dabbled briefly in Formula 1 during the late Fifties and early Sixties when Grand Prix racing changed from Italian racing red to British racing green, he is best known for his days in sports cars, usually his green Ferraris.

He was part of the Cobra Ferrari battle for the World Sports Car Championship’s original cast in his green Ferrari GTO which he drove from New York to Florida to race at Daytona and Sebring. He raced his Ferrari to victory in the Kyalami 9 Hours in 1962 on the challenging 2.544 mile South African Grand Prix road course. Piper became an institution at Kyalami, racing his Ferraris to five more victories in South Africa. He also won his seventh Rand 9 Hours in one of the first Porsche 917s delivered to private a entrant. That car wore Piper’s distinctive “BP Green”. While David had no trouble mastering the fast and potent 917, he is best known for his races in Ferraris.

Piper not only raced his own Ferraris but drove for the most famous Ferrari teams; NART (North American Racing Team) and Maranello Concessionaires (British Ferrari distributors) and even as a works driver for the Ferrari factory.

“A gathering like this has never happened before,” Said Bill Warner, founder and Chairman of the Amelia Island Concours d’Elegance, “These men were key players in one of motorsport’s most bitter rivalries. There will never be another opportunity to see these famous men together or to hear the first person details of the battle for the World Sports Car Championship.”

Admission to Friday’s Cobra/Ferrari seminar is $25. Tickets may be purchase online at www.ameliaconcours.org.

Michael Keyser will be signing books at the Saturday Poster and Book Signing event as part of the Amelia Island Concours d’Elegance weekend festivities.

After working at The Baltimore Sun as a reporter, Michael Keyser turned to freelance photography. In 1969, he attended SCCA drivers schools at the Marlboro and Bridgehampton

circuits in a 911 Porsche, and in 1970 formed Toad Hall Motor Racing. For the remainder of 1970 and all of 1971 he competed in SCCA, IMSA and FIA events, at the same time hopscotching throughout the United States and Europe taking photographs for The Speed Merchants, a photo essay on road racing that was published in 1973 by Prentice Hall.

In 1972 Michael finished 3rd in the IMSA Camel GT Challenge series in a 2.5 liter Porsche, at the same time producing a documentary film, also called The Speed Merchants. 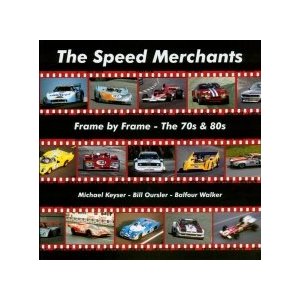 Using the Porsche as a camera car, he raced at Daytona, Sebring, the Targa Florio, the Nurburgring, Le Mans and Watkins Glen with German driver, Jürgen Barth. He placed 2nd in the Camel GT Challenge series in 1973, 3rd in 1974 and 8th in 1975, driving a number of different Porsches. In 1976, after a victory in a Porsche at the 12 Hours of Sebring with Al Holbert, he switched to a Chevy Monza for the balance of the season, finishing 4th in the Camel GT series. In 1981, after driving for numerous teams, Keyser retired from active compeition. The Speed Merchants was re-released in September of 1999 with a totally new text and twice as many photographs. A French Kiss With Death, a book about the making of Steve McQueen’s film Le Mans, by Michael Keyser, with Jonathan Williams, was published in November 1999.

In 2007, Michael’s company, Autosports Marketing Associates, published Bernard Cahier: F-Stops, Pit Stops, Laughter & Tears, a two-volume set covering the colorful life of the French photo-journalist The book contains many of Cahier’s most memorable photos along with personal anecdotes on the “behind the scenes” activities of some of motor-racing’s great drivers from the ’50s through the ’80s. It was the winner of the 2007 Dean Batchelor Award For Excellence in Automotive Journalism. In 2010 Autosports published The Speed Merchants – Frame By Frame – The 70s & 80s, and in 2011 Evolution of the Porsche 911 in Competition, 1965-2010 and Behind Le Mans: The Film In Photographs.