Democrat? There’s an App for that!

Want to know who's democrat in your neighborhood? Now there's an app for that, thanks to the Obama Campaign. 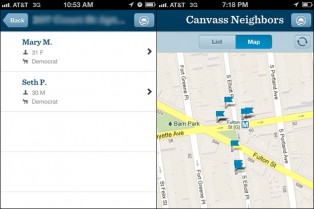 Obama's App to locate Democrats; creepy on so many levels

A sign of how much the times have changed may come from the realization that privacy is a word that in future will only be archived in dictionaries as: a word that described a time when an individual or group had the ability to seclude themselves or information about themselves and thereby reveal themselves only selectively. Wikipedia says When something is private to a person, it usually means there is something within them that is considered inherently special or personally sensitive.

It also states that privacy intersects with security and in this arena we have seen privacy taken a backseat to constitutional rights since September 11, 2001, a development that now pus Privacy on the endangered species list. The privacy to not have to reveal your earnings publicly, or your religion or how many times you have been married or your sexual preferences, mishaps of your younger years or who you support politically is now a thing of the past. Even though the issue of privacy has occasionally moved to the forefront of discussions since the Internet came into existence, it is safe to say that the Battle for Privacy has been lost, not in small part because of the success of Facebook.

So to witness the Obama Campaign coming out with an App that reveals which one of your neighbors is with you and who is against you, to loosely borrow a phrase from Bush the Younger, marks just another nail in the Privacy coffin.

But this one takes me back to the abuse of knowledge in the 1930s and 40s when Nazi Germany knew exactly where to find the Jews and the Gypsies when it was time to send another train to Dachau.

Is it a sign of the times that we don’t care anymore or is it a sign on the wall. Obama’s Campaign released the App last week, which includes a Google map for canvassers that recognizes your current location and marks nearby Democratic households with small blue flags. And for each of the targeted addresses, the display gives first name, age and gender.

No doubt a wet dream for campaign planners but I can’t help thinking that it also may create a new source of information for hate mongers and unstable characters who pull loaded guns out of their pants and walk into theaters, schools or temples, because they think they have a score to settle.

And what really bugs me is the paternalistic replies from those involved in bringing this app to the market. A Spokesman for the Obama campaign, who ironically enough declines to be named said: ” The app has built-in mechanisms to detect when people are misusing the data. The campaign is strongly committed to ensuring the safety and privacy of the public and follows up with appropriate action, including alerting appropriate authorities if necessary, in any case of abuse or inappropriate behavior.”

Honestly this is one of the creepiest lines I have ever hear. Never mind the question who decides what is appropriate here and what is not, the threat of alerting the appropriate authorities to follow up with appropriate action against inappropriate behavior is so all around scary, that sleeping at night just became a tad more difficult. Appropriate is a very iffy word, as it changes its meaning depending on who’s mouth formulates the word.

Furthermore, if appropriate action is demonstrated by the (appropriate or inappropriate) inaction or inability to act of Aurora Colorado authorities, after being alerted by a doctor breaching her oath on patient/doctor confidentiality that could have averted a mass killing, than Hitler’s Nazi Germany will be a bleak reflection of which typical crimes against humanity will be possible as a result of this app.

Or as one commenter inappropriately said: “How helpful when I need to locate a Democrap woman,” and another one surmised that “Democrats more likely than not have no guns to defend themselves against intruders”.