Disney World as Seen Through the Eyes of a Child

Disney in August is not much fun for adults, but for a child in love with princesses and fairies, however, Disney is paradise. 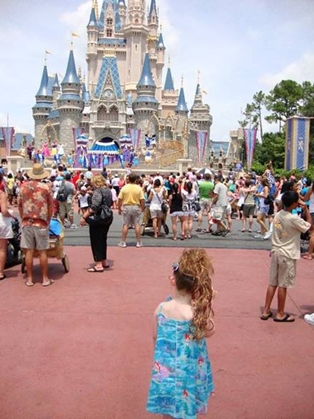 Disney World as Seen Through the Eyes of a Child

There is no better way to see Disney, than through the eyes of a child. My 4-year old granddaughter from Ohio came to visit for a couple of weeks and my mother and I decided to take her to visit the Magic Kingdom. We arrived before the gate opened as we had an early appointment at the Bibbidi Bobbidi Boutique inside Cinderella’s Castle. There, a fairy godmother in training was appointed to transform her into a princess. She was fussed over, made up, pixie dusted, and photographed. As an aspiring princess in real life, she was totally in her element. Next, we took her to the Castle Couture photo studio for portraits. As she posed for each photograph, I could see the diva emerging.

At each place that we went, the employees and other guests would bow to her as if she were a true Disney princess. She took it all in stride as if it was expected. She would politely say thank you and move on. She was on a mission to get the autograph of each princess. She did not have much interest in the rides, or the scenery, she just wanted to find the princesses.

Near the castle I spotted Mary Poppins and Burt, the chimneysweep. My little princess was not interested. Next, we ran into Peter Pan and Wendy, but she wanted to keep moving so that we could locate the royal highnesses.

When we went into Toonland, near the Teacups, we found Alice and the White Rabbit from Wonderland. She was excited to have Alice sign her autograph book and while we were waiting, Cinderella’s evil stepmother and stepsisters went by and had a dialogue with Alice.

Disney in August is not much fun for adults. There was a heat index of 107 degrees and with water at $2.50 a bottle; there are much nicer places to be. For a child in love with princesses and fairies, however, Disney is paradise. 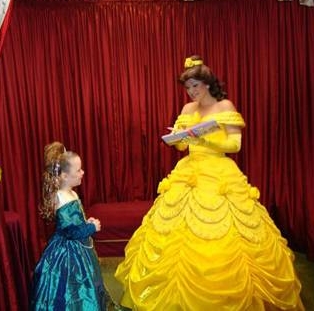 We discovered Toontown’s Hall of Fame tent with signs pointing the way to either Princesses or Fairies. It was blessedly air-conditioned and we did not mind waiting at all. There was not a long wait at all to meet the princesses and Princess Aurora (Sleeping Beauty), Cinderella, and Belle (Beauty and the Beast) greeted each child separately and signed their books and posed for photos. The line to meet the fairies was much longer, but still worth the wait to meet Fawn, Tinkerbell, and Terrance.

We rode the carousel, teacups, and Dumbo on the way to find the elusive Ariel and braved the heat to stand in front of the castle for a show featuring Mickey, Minnie, Goofy, Donald, Captain Hook, Maleficent, Snow White, Sleeping Beauty and Cinderella along with each Prince Charming. The daytime fireworks caused her to gasp with wonder.

Although we never found Ariel, sharing the magic of Disney through her eyes made for a wonderful experience for two grandmothers and a princess. Maybe next summer we will do it again!