The victim grabbed a hammer and struck his brother in the side of the head momentarily disarming him; he and his elderly mother fled the residence. 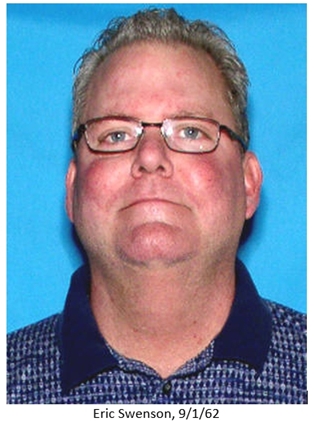 The Fernandina Beach Police Department and Nassau County Sheriff’s Office responded to a domestic disturbance at 2736 Ocean Oaks Drive South after an argument between brothers ended in gunfire.

Timothy Swenson, 48 years of age, reported that his brother, Eric Swenson, 52 years of age, was upset because of a cancelled job interview and a family wedding wherein he was not invited. He became combative and argumentative, eventually pointing a semi-automatic rifle at his brother’s face. Timothy grabbed the gun just as Eric fired the weapon at close range, and leaving the side of his face with powder burns. The victim grabbed a hammer and struck Eric in the side of the head, momentarily disarming him. At that time both Timothy Swenson and his elderly mother, Sara Swenson, 80 years of age, fled the residence to a neighbor’s house.

As officers arrived at the scene Eric Swenson retreated back into the house where he claimed to have an AR-15 Assault Rifle and he threatened to use the weapon against responding officers. A perimeter was quickly established, neighbors were evacuated or ordered to remain inside their homes, and the joint NCSO/FBPD Special Response Team (SRT) was notified and activated. Contact was made by phone with Eric Swenson and he was instructed to leave all weapons inside the residence and exit the house. After repeated phone calls, where an agitated Eric Swenson ignored commands and often hung up with negotiators, he was seen raising and aiming the weapon and was shot once in the arm by an SRT officer from the NCSO. The situation was resolved at approximately 7:30 PM.

At that time he dropped the weapon and was taken into custody and treated at the scene by Fernandina Beach Fire Department Paramedics and then transported to UF Health for further medical treatment.

The State Attorney’s Office and the Florida Department of Law Enforcement were both notified and both responded to the scene to initiate their investigations related to the use of force.

Media inquiries related to the police-involved shooting should be directed to Sheriff Bill Leeper or the FDLE.