Do you know who Eric Holder is?

In the News, Opinion, Politics

"Due process" and "judicial process" are not one and the same, when national security is at stake, says US Attorney General Eric Holder. 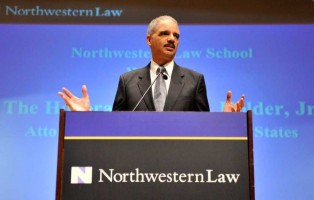 US Attorney General Eric Holder at Northwestern in Chicago

• When you see that in order to produce, you need to obtain permission from men who produce nothing…

• When you see that money is flowing to those who deal, not in goods, but in favors…

• When you see that men get richer by graft and by pull than by work, and your laws don’t protect you against them, but protect them against you…

• When you see that trading is done, not by consent, but by compulsion…

you may know that your society is doomed…

If you don’t know who Eric Holder is, then it’s time you learned how he declared last week our constitutional democracy to have crossed the line into a fascist regime. Holder is the US Attorney General who read from a prepared piece of paper at the Northwestern University’s Law School a couple of days ago the rationale the government is now using when ordering the killings of American citizens.

Here is literally what he read out to his audience:

“Some have argued that the President is required to get permission from a federal court before taking action against a United States citizen who is a senior operational leader of al Qaeda or associated forces. This is simply not accurate. “Due process” and “judicial process” are not one and the same, particularly when it comes to national security. The Constitution guarantees due process, not judicial process”.

I think it is always important when reading this sort of thing to separate the inconsequential the “here and now” elements of no lasting importance – from the language related to setting long-term precedence. With that in mind, here is Holder’s statement with anecdotal elements disconnected.

“Some have argued that the President is required to get permission from a federal court before taking action against a United States citizen who is a senior operational leader of al Qaeda or associated forces. This is simply not accurate. “Due process” and “judicial process” are not one and the same, particularly when it comes to national security. The Constitution guarantees due process, not judicial process.”

Ergo, what the administration is now claiming as standard operating policy is that it can formulate certain procedures on an ad-hoc (designed for each individual situation) basis and call it “due process.” Provided their functionaries follow that process, the government is free to do virtually anything, in this instance, kill US citizens.

A “juxtapositioning” of Al Qaeda for any form of rebellion can be construed as terrorism.; even middle aged women in Virginia protesting the government mandated ultrasounds for abortions could end up being prosecuted for terrorism. More than 10 years after 9/11 Al Qaeda is a shell of its former self, but that doesn’t mean the world has been rid off the evil of fundamentalism. And while other domestic and global terrorist fractions will appear and vanish as they have done throughout history,  giving government carte blanche to decide what defines terrorism, is giving the power and its justification to extreme fundamentalism.

Observant readers did notice Holder didn’t make a distinction between targeting US citizens here in the country versus abroad. In essence he gave a blanket statement that promotes fascism.

And guess what. Holder delivered this statement that effectively killed the constitution in front of an audience of Law Students and that underscores how much disdain Washington has for the American public and how beaten down ignorant and afraid the American populace has become. Don’t tell me these Law Students  didn’t know the implications of what was said. Yet, they decided to politely applaud and shut up.
Probably the result of accepting that it is already too late for the country after the Trespass Bill recently went through Congress with an overwhelming 388-3 majority.

In simple words: The Tresspass Bill makes it a crime to enter or remain in an area where an official with protection privileges (such as office aspiring pundits) is visiting, even if the person does not know it’s illegal to be in that area and has no reason to suspect it’s illegal.

I refuse to expand on that manipulative piece of crap legislation in these lines, but be aware that from here on out you can be minding your own business some place when a member of the elite enters, and his or her mere presence sucks you into their federally protected “bubble” where a single false move, intentional or otherwise, can end up very badly.

My advise: keep your hands visible at all times.
Of course and thankfully, I am not alone in seeing the signs of fascism cropping up on an almost daily basis. But at this point the masses are literally too scared to say something, other than perhaps in quiet whispers behind closed doors.

Examples of rampant fascism by governments exercising their might are so numerous these days, that there really is no way to go back, which is why so many have elected to either stay invisible under the radar or quietly prepare to move out of harm’s way.

I have been writing about this development for the better part of five years now, mostly from a point of “it probably won’t happen to its full extent in my life time”, but I think I’m wrong. I think the race is on and it has the very real potential to get quite ugly before whatever system comes next makes it across the finish line. I think it’s just a matter of time now – certainly within the lives of most of us, judging by the speed of adoption of the relevant technology – that we are going to see a new paradigm in government, one that will quickly abandon government operating on outdated models.

I honestly can’t tell you how things are going to unfold from here on and I do understand the fear motivation why Attorney General Holder’s audience politely applauded after he coldly and arrogantly revealed that the constitution is no more. I wonder if New Hampshire can do me a favor and invite the US Attorney General for a similar speech. The State’s official motto “Live Free or Die” would be put through an extreme test. In the meantime, if you’re out of options to avoid or walk away from what’s rapidly coming our way, you may as well go about your life as happily as you can – my parents did while being occupied by an overpowering Nazi Germany. But if you do have options, please don’t forget to prepare for the transition that is on your doorstep, or as others even better informed then me claim, is already underway.