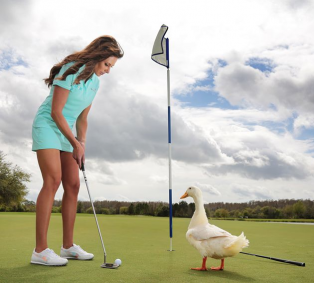 Do you remember waiting patiently on New Year’s Eve Y2K for everything to come to a screeching halt? We all thought the world was going to come crashing down around us and we all anxiously watched TV to see what was happening around the world. Instead of the world coming to an end we saw the birth of a TV commercial advertising icon, The Aflac Duck.

Aflac has come a long way since January 1, 2000, when the American public got its first glimpse of a new, innovative marketing campaign for a little-known supplemental insurance company in Columbus, Georgia. When this little white duck of few words, but a lot of personality, stormed upon the scene in a commercial titled “Park Bench”, it made advertising history and transformed Aflac into an international powerhouse. Aflac’s name recognition soared from 11 percent to 94 percent where it remains today as Aflac is taking care of over 50 million policyholders. Aflac pays you cash, not the doctor or the hospital, and Aflac pays you fast – in an average of just 4 days!

Nancy and Bob Dervaes, your local Aflac agents are here to reintroduce you to The Aflac Duck. If no one has every explained Aflac to you, you owe it to yourself to learn how Aflac works to help pay your bills when you are hurt or sick and cannot work!
We are excited at Searchamelia to welcome Aflac agents Nancy and Bob Dervaes as a new advertiser, moreover because we think supplemental insurance is a true benchmark insurance for the future and let’s face it, the Duck is hilarious.