Do You Want to be a Pirate?

Behind the scruffy beards, the plumed hats, leather boots, and tight corsets, the Pirates are active members of the community with real jobs like realtors, nurses, business owners and retirees. 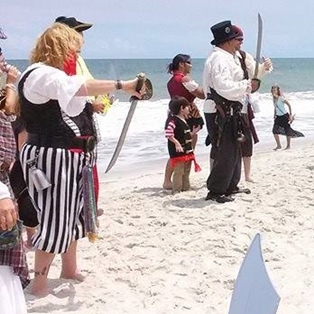 The Fernandina Pirates Club, Inc. is a lively crew with a very active presence and has received proclamations from both Nassau County, Florida, and the City of Fernandina Beach announcing them “Goodwill Ambassadors to the World.” Founded in October of 1973, to promote the Isle of Eight Flags Shrimp Festival, the Fernandina Pirates entertain crowds at a variety of parades and events in Northeast Florida and Southeast Georgia.

Although their primary focus is on promoting the annual Shrimp Festival, “We are also interested in the community at large, and try to do our part to better life in our charming little seaport town.” Said Club Captain (President) Lawrence Mackie. “Fernandina offers a slower paced, tourist driven community that was all about Pirates long before being a Pirate was cool.”

Behind the scruffy beards, the plumed hats, leather boots, and tight corsets, the Pirates are active members of the community with real jobs like realtors, nurses, business owners and retirees. These volunteers participate in a number of community and charitable events such as monthly Pirate Blood Drives, Katie’s Ride For Life, Joy to the Children, Relay For Life, Downtown Pajama Party, Fernandina Beach High School’s Homecoming Parade and football games, NAMI Walk, and more. The Pirates even offer their own scholarship to a high school seniors entering college, and a military scholarship, too.

With Shrimp Festival on the horizon, this is when the Pirates are often asked, “How do I become a Pirate?” First, you start off as a Swabbie. Being a Swabbie lets you participating in parades, working booth shifts at the Shrimp Festival or other events, help out at “work parties” where we may paint road worthy pirate ships, or simply decorate hats. This is an opportunity to learn how to walk, talk, act, and dress like a Fernandina Pirate. After attending three meetings, three in-town functions, and three out-of-town functions, we hope you have made new friends among the existing membership. You are then sponsored by a Pirate in good standing and nominated for Pirate membership, with full voting and black powder privileges.

If you are interested in becoming a Pirate, the Fernandina Pirates Club normally meets on the third Tuesday of each month, but in preparation of the Festival, they will be meeting on April 12th and 19th, at 7:00 p.m., upstairs, at 115 South Second Street, in historic, Fernandina Beach. Their April 26th meeting will be held at the waterfront.

The Fernandina Pirates Club is a non-profit corporation, with a board of officers, membership requirements and safety rules, too, but they are always looking for a few good ship mates! If you would like to learn more about the Pirates, please join them at an upcoming meeting, “like” them on facebook, visit FernandinaPirates.com, or call Judie Mackie at (904) 583-0659.