Doggies in the Pool at the Rec Center

Prior to resurfacing the pool area, Fernandina Beach dogs paid admission to swim in the normally off-limits pool of the Rec Center 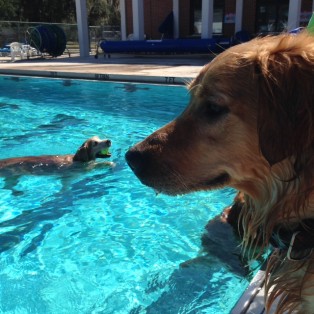 Keeping an eye on the Pup?

Quite an unusual sight at the Atlantic Avenue’s Rec Center last Saturday when our canine friends frolicked in and around the pool. According to Kathy Russell,  Aquatics and Greenway Supervisor for the City of Fernandina Beach’s Parks and Recreation Dept., the excited bunch was invited to come and play, prior to the commencement of a pool resurfacing project this week. 20 happy dogs were admitted to the typically “off limits” pool area.    Some jumped in after balls and rubber ducks, while others preferred to simply socialize on the deck or run laps around and through the adjacent kiddie pool.

As can be seen from the underwater photo, one pooch was actually hanging down from the ledge, as if a teenager on the look-out for playmates. Very funny. A portion of the per-dog admission was shared with the Nassau Humane Society.

The Atlantic pool will be closed for the duration of this week but is scheduled to re-open on March 3rd. 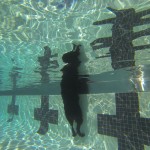 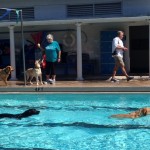 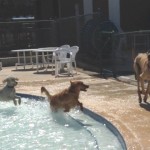