Jones is the 45th inductee into the Hall of Famous Missourians, which opened in 1982. 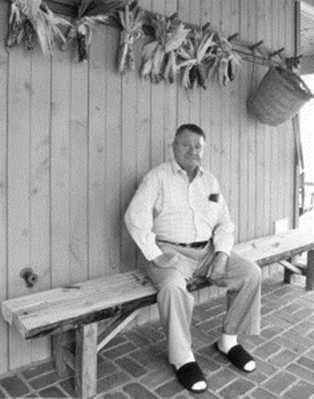 The late Edward “Ted” Jones, the visionary behind the Edward Jones’ one-financial-advisor-per-branch office business model and a conservationist who turned an abandoned railroad into a state park, was inducted into the Hall of Famous Missourians recently at the state’s capitol in Jefferson City.

Jones’ achievements and contributions of one of Missouri’s most successful businessmen and dedicated conservationist were recognized at the ceremony on Oct. 9 in the Missouri state capitol.

Born and raised in St. Louis, Jones recognized an opportunity in the financial-services industry to serve individual investors throughout Missouri and across the United States. He created a branch office business model that set Edward Jones on the path to become a Fortune 500 firm with more than 12,000 branch offices serving 7 million clients across North America.

Jones also was a conservationist who recognized the potential to turn a 225-mile stretch of abandoned railroad into a magnificent state park. He was a generous donor and force behind the creation of Missouri’s Katy Trail, which is now a segment of the Lewis and Clark National Historic Trail and the American Discovery Trail, and was inducted into the national Rail-Trail Hall of Fame. Because of his efforts, the trail now attracts 400,000 hikers, cyclists and joggers each year.

“Ted was a visionary – always able to see things as they could be,” Edward Jones Managing Partner Jim Weddle said.

Jones is the 45th inductee into the Hall of Famous Missourians, which opened in 1982. The Hall, which is located in the third floor rotunda of the Missouri State Capitol, includes bronze busts of all inductees, including famous Missourians such as Harry Truman, Mark Twain and Walt Disney.

Edward Jones, a Fortune 500 company, provides financial services for individual investors in the United States and, through its affiliate, in Canada. Every aspect of the firm’s business, from the types of investment options offered to the location of branch offices, is designed to cater to individual investors in the communities in which they live and work. The firm’s 14,000-plus financial advisors work directly with nearly 7 million clients. Edward Jones, which ranked No. 6 on FORTUNE magazine’s 100 Best Companies to Work For in 2015, is headquartered in St. Louis. FORTUNE and Time Inc. are not affiliated with and do not endorse products or services of Edward Jones. The Edward Jones website is located at www.edwardjones.com, and its recruiting website is www.careers.edwardjones.com. Member SIPC.