Each hurricane season the phrases El Nino and La Nina, and their relationship to the severity of the season, arise. 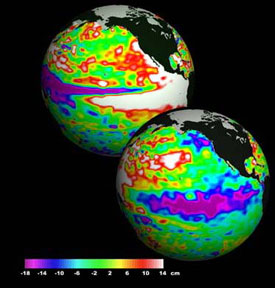 During El Niño, sea-surface temperatures in the eastern equatorial Pacific are warmer than usual (top), while during La Niña the same region is cooler.

Photo and caption found at www.lbl.gov.

Each hurricane season the phrases El Nino and La Nina, and their relationship to the severity of the season, arise.

The El Nino is a periodic warming of the Pacific Ocean in early winter. This produces more rain in South America and drier conditions in SE Asia. The El Nino, like the La Nina, occur every few years.

Spanish for the Christ child, El Nino, is a pattern of a warm current off Peru and Ecuador usually seen at Christmas time. This irregular cycle develops from the tropical trade winds driving the surface winds to the east. As the deeper waters are blown to the surface and exposed to the sun the waters heat up, literally raising the temperature of the water in the ocean.

The warm water creates more rainfall eastward leaving the western Pacific drier. So while the southern US gets more rain and flooding during an El Nino, droughts occur in the western Pacific with Australia particularly vulnerable to fires. In the winter months of El Nino, the United States will feel milder weather in the northeast and the southern states in the US will have cooler than normal temperatures.