Live Music is back at the Florida House, the matriarch of historic downtown Fernandina Beach, with Evolution bringing the sixties and seventies back on stage. 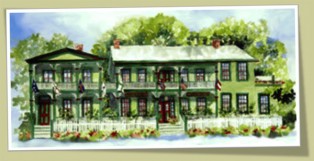 For a short while there during the height of the great recession of 2008 we were afraid we were going to loose the Florida House Inn as a memory of times gone by.  But then in 2010 new owners appeared and now the the matriarch of the historic district of Fernandina Beach and Amelia Island is back in business full force and popular local duo “Evolution” is proud to be part of the revival. Still fondly remembering the atmosphere during Songwriters Evenings and other live performances at the Florida House, Evolution is looking forward to a great show as they start of the Memorial Day weekend with the Florida House Summer Kick off, playing a hitlist of 60s, 70s and 80s tunes mixed with a selection of originals. Not much can beat the atmosphere of playing in the garden near the fountain, with a warm summer breeze under the stars. Evolution starts this Saturday May 28 at 6pm.

After an almost two year hiatus, the local Fernandina Beach two man band started back up several months ago and now seems to be appearing everywhere as a duo or as individual performers. Dave, a Wisconsin native – where he went back to for the past two years to take care of his elderly parents, has been playing bands and writing music for several decades and Han, who hails from Amsterdam, is a “product” of the Dutch rock and blues scene dating back to the bands Focus and Golden Earring around 1970.

If you’re looking for a great night under the stars this weekend, listening to tunes that’ll make you at minimum sing the chorus lines of songs from those glory days, you should make a note in your weekend planner to be at the Florida House Inn this Saturday May 28 from 6 to 10pm.

If you want to catch any other performances here is their schedule:

• Saturday May 28th Evolution will be at the Florida House Inn on S 3rd St. from 6-10pm

• Then Han will take 2 weeks to travel up north, while Dave Ferraro does a solo performance at Café Karibo on Saturday the 18th and

• on July 2nd Evolution will be at the American Legion Post at 626 S Fernandina Beach Street to start of the July 4th Weekend.

To complete the roster Han also sits in with the Blues Festival’s Houseband the Beech Street Blues Band at the monthly Blues Jams at Café Karibo. For a jam schedule click here.