Fear is at the Root of Workaholism

The first thing you have to accept is that Workaholism is never attached to wealth because the root of workaholism is fear of loss. 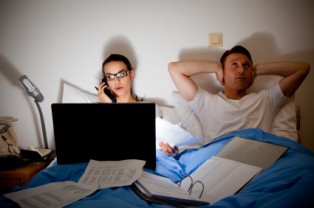 Workaholism until the lights turn off

Workaholism is a topic that many people don’t want to talk about. Right up there with overeating, procrastination, money management and fitness…. many entrepreneurs, small, medium or large really don’t want to talk about the topic of workaholism. Especially since most people confuse workaholism with ambition and career goals, while in reality it is most likely one of the biggest addictions that holds people back from accomplishing their goals. Besides that, workaholism has never been conclusively linked to wealth.

The Root Of Workaholism And Why It Is Neither Tied To Wealth, A Happy Life Or A Dream Business
On one hand there are many “wanna be” business owners holding themselves back with the excuse that they don’t want to be a workaholic, yet they are often the same people who spend all day on Facebook, Twitter, Google and other web pages blocking out the fact that they are not doing the things they need to create financial independence. By my definition they already are workaholics, they’re just not making any money. And many of them have a wide variety of excuses at their fingertips.
On the other hand there are the real workaholics, who deny that they are, but use the expression “Busy, busy” in every second sentence they utter, when you ask them how they are.

So please, if you’re thinking of bringing up an excuse, just take a deep breath right now. I’m not going to ask you to join a support group, get a new planner or quit your job. I’m just going to tell you a couple of things I have discovered over 40 years of workaholism versus the true appreciation of financial independence. As with everything in life, it is entirely up to you to learn from it, discard it or don’t even read any further than the period behind this sentence.

But if you suspect yourself to be a workaholic, beyond being driven by career ambition and an absolute love for what you’re doing, there are ways to stop working so many hours and yet increase your paycheck or income. Here are some considerations or strategies to getting there.

The first thing you have to accept is that Workaholism is never attached to wealth because the root of workaholism is fear of loss. I guess it’s related to that pathetic expression I often hear: “I’m afraid that when my ship comes in, I’ll probably be at the airport.” People suffering from workaholism  won’t stop working because they fear they’ll lose the one big break. Beyond that people press forward when they know they should be resting because in their mind that is what successful people do…. and most of all in life they fear not being successful.

Fear is the major reason for being a workaholic.

My corporate career started out working 90+ hours per week. That means, that aside from sleeping occasionally, my mind was on the business more than it was on anything else. It lasted for 7 years and 4 months and it almost killed me, literally. Most of the time I ran on fumes across the globe. While working for the MAN, I developed leisure real estate interests in the Canary Islands and Sardinia, I developed marketing consultancy opportunities across the globe and truly worked 16-18 hours a day. But I was young, energetic and had the world by the balls. I loved racing between meetings, airports cocktail lounges and luxury hotels, but when the breakdown came, I left a marriage and considerable wealth in the dust of those 7 years.

Yes “I LOVED MY JOB” but the fear to miss out on anything “worthwhile” in life, drove me to ignore family and friends and had altered my value perspectives completely.
After a period of contemplation I actually left my native country to pursue a better balanced life across the ocean.
And even though I made a commitment to never again “live to work”, my mindset now operated in the new world AMERICA. Initially my life and my business began to flourish. Instead of numerous hours in offices and meetings, I shifted focus to the social level, made numerous contacts, acquaintances, friends and I didn’t lose out on anything. Actually, in a fraction of the weekly hours I used to work, I built several companies and with far fewer headaches. I learned to outsource the 100’s of hours I used to work in my previous life, making sure the work was still being done, just not by me. I learned to energize others to employ their best efforts and judgements.

But Workaholism Comes in Different Shapes

Fear is the biggest contributor to workaholism, followed by status climbing, servitude and to a much smaller degree people who truly love what they’re doing. This essay is about those who are in fear of missed opportunities.
In the time before computers and the internet, business was done via mail, telephone, telex, meetings and annual conventions and exhibitions. Concluding a transaction was usually a lengthy deal with many details to be worked out. Circumstances like late night dinners and Nightclub visits were often if not always part of the decision making process.

Excessive hours were a natural by product and workaholism was an essential phase on your way to the top. Admittedly, I fell for it as I made and lost large amounts of “my ship’s cargo” on a roller coaster ride through the first half of the 1980s and by the time 1986 came around, salvation of my life’s values was found on a sailboat in the Caribbean waters.
And that’s when I learned that I was a complicated workaholic.

I was a perfection driven workaholic, feeding on a voracious process of learning, absorbing and connecting. Within 2 years I was back building resorts, marketing tourism and crossing the globe.

Arrival of the Internet

And as the efficiency and speed of computers and internet communication arrived, workaholics like me took it as a sign to expand their exposure to even more opportunities. Not only more ships were coming in, with communication speed at our fingertips speculation became a huge part of a workaholics business investment. And that trend has not slowed down, but instead has sped up exponentially with a world going on SmartPhones and on-the-go mobile connection.

And here comes the need for truth for workaholics!
It’s critically important to be aware that there is a problem and then take actionable steps to hold yourself accountable. But beyond just getting another planner, calendar, desk timer, assistant who reminds you to stop working, it’s even more critical that we get past our root issue of fear.
• Do you fear missing out on that big contract?
• Do you worry about letting that one big client go even though you know it’s not a good fit?

Yes, fear of loss and fear of missing the big chance, break or opportunity, are a big component to workaholism. It’s also a key ingredient of living a life without boundaries. Living without boundaries never creates wealth. For example….
If we are willing to take phone calls from very successful people at 11:00 pm at night just because of who they are, we are lowering ourselves so that others can tear down our boundaries. If someone is truly respectful and successful, they won’t ask you to be available at any time that they have open so they can connect with you. I advise you to be flexible when a good client or conversation presents itself but that doesn’t mean shrink back, be manipulated or do whatever someone wants. Boundaryless people need training, so respect yourself enough to give them some. Especially in the business consultancy arena even balanced people are turned into workaholics because of their efforts to please beyond the reasonable.

So if you really want to know if you or your family is struggling with you being a workaholic, just ask them. They really won’t lie. And if you are very serious about finding out if you are ignoring your relationships at home, the best way to do so is to simply ask. If the answers are YES, you may want to start correcting yourself by mapping out your most productive hours.

Don’t accommodate bad habits. People who want to work through the night tend to be more creative but they also need to make sure they are sleeping and resting through the day. My wife tends to have her laptop in bed and I am a morning riser! I usually get up between 5-6:00 am and tend to get some good work done before 8:30 I usually quit these days around 6pm and build in a beach walk with the dog and a regular workout at the Gym. For on-island transportation I use my bicycle and I’m happy to have established boundaries with our lifestyle. If we both didn’t honor certain time frames, we might not be able to work and live under one and the same roof.

How to cure workaholism without losing your income potential
Learning to train your body WHEN it can and will work is a big ticket to overcoming workaholism. Work when your creative flow is best and you tend to be in your best mood!
Most workaholics have a massive amount of tension and anxiety they need to release. This is why a good intense cardio or weight lifting workout can help!
Overcoming workaholism can be very challenging. Some people need a mastermind group or a mentor… others need an intervention.

Here’s a litmus test for you- do you feel panic and shaky when you say no?  Well let me tell you this, I still do. But now I settle into the fact that this is most likely a good sign that I am supposed to say no. I make sure I’m not saying no because of fear or some other form of regret. And I also test the waters to give myself the freedom I need to make great decisions. If someone can’t wait 24 hours for an answer from me on something they are most likely not someone I want to do business with anyways. If someone can’t honor my privacy and keeps calling my phone even though they know I operate a sizable business, they are definitely not someone I want to work with. It’s a walk of faith. Time is the thing that heals the most. But taking those first few steps to be sure that fear doesn’t’ have a noose around your neck is the ticket.
And yes there are times that I have to work some longer hours. This is an issue of balance and budget. Just like learning to balance and budget. If the total sum of the exercise is going to be great for my partners and family, it’s a small sacrifice and no one minds at all. But if it becomes the norm, it’s a sign that you might have a problem.
On January 1 of this year I introduced you to the concept of Critical Production Mode . I have been applying CPM to my life since I learned about it and it has served me very well

Learning to breathe is a big key to wealth.
Learning to say NO when appropriate, is a good start in pursuing the best you can be. If you never get past your own personal issues however, you are unable to give attention to the people who need you. So make a decision that it’s about impacting the lives of others with the gifts you posses. I promise you, your life will be so much better and complete.