Fed Policy Will Produce the Biggest Asset Bust Ever

The dollar has weakened sharply, while government bond yields have gently increased but stayed low and stable. 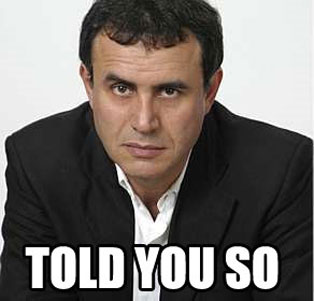 Widely followed economist Nouriel Roubini, ‚ÄúDr Doom‚Äù, just wrote a “must read” opinion piece for the Financial Times.‚Ä®In the piece, Roubini notes that the Fed’s super low interest rate policy is fueling a huge asset bubble‚Ä¶ as investors borrow cheap dollars to buy real estate, stocks, and commodities. Roubini claims the situation will produce the biggest asset bust of all time.‚Ä®Make sure to read this one‚Ä¶ and make sure you own some gold and silver.

‚ÄúSince March there has been a massive rally in all sorts of risky assets ‚Äì equities, oil, energy and commodity prices ‚Äì a narrowing of high-yield and high-grade credit spreads, and an even bigger rally in emerging market asset classes (their stocks, bonds and currencies). At the same time, the dollar has weakened sharply, while government bond yields have gently increased but stayed low and stable.

This recovery in risky assets is in part driven by better economic fundamentals. We avoided a near depression and financial sector meltdown with a massive monetary fiscal stimulus and bank bail-outs. Whether the recovery is V-shaped, as consensus believes, or U-shaped and anaemic as I have argued, asset prices should be moving gradually higher.

While the US and global economy have begun a modest recovery, asset prices have gone through the roof since March in a major and synchronised rally. While asset prices were falling sharply in 2008, when the dollar was rallying, they have recovered sharply since March while the dollar is tanking. Risky asset prices have risen too much, too soon and too fast compared with macroeconomic fundamentals. So what is behind this massive rally? Certainly it has been helped by a wave of liquidity from near-zero interest rates and quantitative easing. But a more important factor fueling this asset bubble is the weakness of the US dollar, driven by the mother of all carry trades. The US dollar has become the major funding currency of carry trades as the Fed has kept interest rates on hold and is expected to do so for a long time. Investors who are shorting the US dollar to buy on a highly leveraged basis higher-yielding assets and other global assets are not just borrowing at zero interest rates in dollar terms; they are borrowing at very negative interest rates ‚Äì as low as negative 10 or 20 per cent annualised ‚Äì as the fall in the US dollar leads to massive capital gains on short dollar positions.

Let us sum it up

Traders are borrowing at negative 20 percent rates to invest on a highly leveraged basis on a mass of risky global assets that are rising in price due to excess liquidity and a massive carry trade. Every investor who plays this risky game looks like a genius ‚Äì even if they are just riding a huge bubble financed by a large negative cost of borrowing ‚Äì as the total returns have been in the 50-70 percent range since March.

People‚Äôs sense of the value at risk (VAR) of their aggregate portfolios ought, instead, to have been increasing due to a rising correlation of the risks between different asset classes, all of which are driven by this common monetary policy and the carry trade. In effect, it has become one big common trade ‚Äì you short the dollar to buy any global risky assets. Yet, at the same time, the perceived riskiness of individual asset classes is declining as volatility is diminished due to the Fed‚Äôs policy of buying everything in sight ‚Äì witness its proposed $1,800bn (¬£1,000bn, ‚Ç¨1,200bn) purchase of treasuries, mortgage-backed securities (bonds guaranteed by a government-sponsored enterprise such as Fannie Mae) and agency debt. By effectively reducing the volatility of individual asset classes, making them behave the same way, there is now little diversification across markets ‚Äì the VAR again looks low.

So the combined effect of the Fed policy of a zero Fed funds rate, quantitative easing and massive purchase of long-term debt instruments is seemingly making the world safe ‚Äì for now ‚Äì for the mother of all carry trades and mother of all highly leveraged global asset bubbles.

The Reckless Fed is Feeding a New Asset Bubble

While this policy feeds the global asset bubble it is also feeding a new US asset bubble. Easy money, quantitative easing, credit easing and massive inflows of capital into the US via an accumulation of forex reserves by foreign central banks makes US fiscal deficits easier to fund and feeds the US equity and credit bubble. Finally, a weak dollar is good for US equities as it may lead to higher growth and makes the foreign currency profits of US corporations abroad greater in dollar terms.

The reckless US policy that is feeding these carry trades is forcing other countries to follow its easy monetary policy. Near-zero policy rates and quantitative easing were already in place in the UK, eurozone, Japan, Sweden and other advanced economies, but the dollar weakness is making this global monetary easing worse.

Central banks in Asia and Latin America are worried about dollar weakness and are aggressively intervening to stop excessive currency appreciation. This is keeping short-term rates lower than is desirable. Central banks may also be forced to lower interest rates through domestic open market operations. Some central banks, concerned about the hot money driving up their currencies, as in Brazil, are imposing controls on capital inflows. Either way, the carry trade bubble will get worse: if there is no forex intervention and foreign currencies appreciate, the negative borrowing cost of the carry trade becomes more negative. If intervention or open market operations control currency appreciation, the ensuing domestic monetary easing feeds an asset bubble in these economies. So the perfectly correlated bubble across all global asset classes gets bigger by the day.

But one day this bubble will burst, leading to the biggest co-ordinated asset bust ever: if factors lead the dollar to reverse and suddenly appreciate ‚Äì as was seen in previous reversals, such as the yen-funded carry trade ‚Äì the leveraged carry trade will have to be suddenly closed as investors cover their dollar shorts. A stampede will occur as closing long leveraged risky asset positions across all asset classes funded by dollar shorts triggers a co-ordinated collapse of all those risky assets ‚Äì equities, commodities, emerging market asset classes and credit instruments.

Why will these carry trades unravel?

First, the dollar cannot fall to zero and at some point it will stabilize; when that happens the cost of borrowing in dollars will suddenly become zero, rather than highly negative, and the riskiness of a reversal of dollar movements would induce many to cover their shorts. Second, the Fed cannot suppress volatility forever ‚Äì its $1,800bn purchase plan will be over by next spring. Third, if US growth surprises on the upside in the third and fourth quarters, markets may start to expect a Fed tightening to come sooner, not later. Fourth, there could be a flight from risk prompted by fear of a double dip recession or geopolitical risks, such as a military confrontation between the US/Israel and Iran.

As in 2008, when such a rise in risk aversion was associated with a sharp appreciation of the dollar, as investors sought the safety of US Treasuries, this renewed risk aversion would trigger a dollar rally at a time when huge short dollar positions will have to be closed. This unraveling may not occur for a while, as easy money and excessive global liquidity can push asset prices higher for a while. But the longer and bigger the carry trades and the larger the asset bubble, the bigger will be the ensuing asset bubble crash. The Fed and other policymakers seem unaware of the monster bubble they are creating. The longer they remain blind, the harder the markets will fall.