At approximately 2:00 PM a bank robbery alarm was triggered at the First Coast Community Bank located at 1750 S. 14th Street. 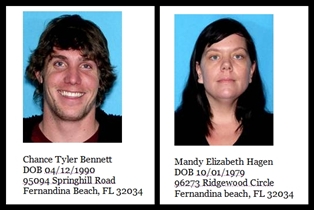 At approximately 1:25 PM today a male subject walked into the SunTrust Bank located at 5211 South Fletcher Avenue wearing a purple mask. Because he appeared suspicious the male was approached by a bank employee, at which time he fled the bank and was last seen leaving the area on foot.

At approximately 2:00 PM a bank robbery alarm was triggered at the First Coast Community Bank located at 1750 S. 14th Street. Police responded in less than sixty seconds and began gathering suspect information, disseminating a general description to responding officers in the area. Responding officers learned that a single male suspect, wearing a purple mask and claiming to be armed with a handgun, announced a robbery and demanded money from the bank tellers. The suspect fled with an undisclosed amount of cash. No one was injured during this incident. 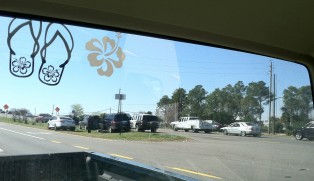 Believing that the suspect was attempting to flee the island via the Shave Bridge, Nassau County Sheriff’s Deputies and Fernandina Beach Police elected to stop all westbound traffic and conduct a visual search for the suspect. At 2:25 PM the suspect was located and arrested by City and County law enforcement working jointly to solve this violent crime as quickly as possible.

Chance Tyler Bennett was found hiding in the back of a mini-van driven by his female accomplice, Mandy Elizabeth Hagen. Both are facing charges of Armed Bank Robbery.