Government, In the News

Four Florida first responders win 42" televisions in a Sunshine 811 contest for fire stations as an extension of Safe Digging Month. 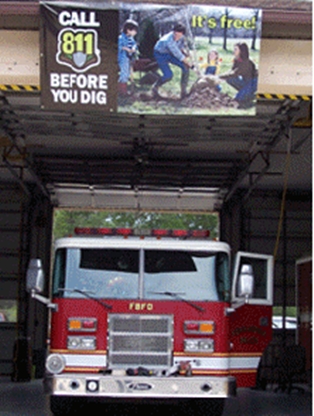 Four Florida first responders win 42″ televisions in a Sunshine 811 contest for fire stations as an extension of Safe Digging Month.

Fire stations were asked to post banners and marquees touting the call-811-before-you-dig message for 20 days. The contest, which ended May 31, 2012, boasted several entries, and four winners. A simple three-step process and a photo was all it took to enter.

A big thanks goes out to the Florida Energy Pipeline Association for its donation of two televisions; and to Florida Gas Transmission, Gulfstream Natural Gas System and Peoples Gas for the additional two televisions.

First responders know the dangers of digging around underground gas, electric, water or communications lines. Underground utility lines are damaged by digging once every three minutes and failure to call 811 first to have underground utilities marked is the culprit in one-third of these incidents.