Miss Mazur was presented $1,500, from the Fernandina Pirates Club, to help with expenses at the University of Florida in the fall. 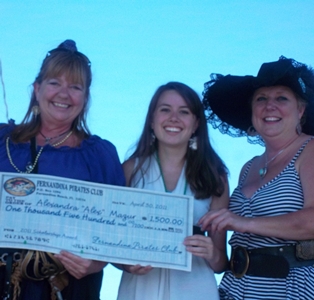 Each year the Fernandina Pirate’s Club, Inc., www.fernandinapirates.com, offer two scholarships to Nassau County seniors. One is for a college bound student, and the second is for a military bound student. While no one entered the military contest this year, the Pirates are proud to announce Alexandra “Alex” Mazur as the winner of the Fernandina Pirates Club Scholarship Essay Contest.

Miss Mazur was presented with a check for $1,500.00, during the Isle of Eight Flags Shrimp Festival, to help with her expenses at the University of Florida in the fall.

Here is her winning essay:

Life on the Sea

Jonathan Banks lived his life on the sea as an admiral in the Royal Navy, hardly ever returning home to his family on land. His daughter Elizabeth, had only seen her father once while growing up but even with that one visit, she instinctively knew there was something unidentifiably peculiar about him. Unlike all the other English men, her father refused to wear a powdered wig, which not only displayed wealth and superiority but was also a wide-spread fashion phenomenon, claiming it restricted his personal freedom and individuality. He also dressed in quite an unusual manner, never shining his shoe buckles and wearing funny-looking breeches called “trousers”. Unfortunately, Elizabeth never had the opportunity to question her father on his reputable appearance or why he lived such a shadowy life.

1692, Piracy was at its peak controlling the warm waters of the Caribbean and at forefront of the various pirate factions were three ferocious pirate captains who made up the Pirate Council. The council held the pirates together, explaining to the assortment of individuals that wars and treasures are won with strength and strength comes with numbers. For this reason, piracy grew and often captives were given the choice of death or a life on the sea. Most individuals strongly believed that piracy was an act of the devil and chose death. However, when a young naval officer was presented with the choice after his ship was plundered and destroyed, he knew that he loved the sea and believed any life was better than none. It was a time when the English wanted to rid the seas of the pillaging buccaneers, however the council believed that the English navy would be no match for the thousands of violent pirates. In addition, the council recently learned of new pirate, Jon Bellamy, who served time as an English Naval Officer. They believed Jon would prove to be of good use in the protecting of the pirate empire and granted him a ship and named him a pirate captain.

image- Scholarship_Check
In the year 1709, seven years after her last encounter with her father, eighteen year old Elizabeth Banks took her first sea voyage traveling from her home in Devon, England to the promising New World. Her mother recently passed due to smallpox, leaving Elizabeth with nothing but a word that she said as she laid dying- Barbados. Elizabeth had only heard of the place but she knew she had to travel to the Caribbean in order to find her distant and furtive father. One day, three months into the sea passage, a sailor spotted a large eerie dark ship in the distance. Whispers of pirates filled the conversations of the passengers. However, Elizabeth thought the ship looked more like a shabby Naval vessel, old and worn out. The ship quickly advanced on the transport and Elizabeth was correct, a military vessel from the English Navy. Nevertheless, the crew were clearly not members of the Royal Navy.

On board they came one by one, with menacing grimaces. The few women were screaming, and the men were scrambling to fetch their daggers and pistols. Yet, what the passengers didn’t understand is that the pirates just wanted to take their valuables. Elizabeth stood in awe. She had always loved stories of pirates but never did she have the opportunity to see them. Then, in the middle of her amazement a broad, tall, dark-looking figure came aboard, clearly the captain. There was something familiar about him, something she understood. She heard his name being called by one of the excited crew members, “Captain, Captain Jon, Jon Bellamy… I found the loot!”

“No,” she thought, “It couldn’t be him.” But then, just as her denial reached its peak, he called her name questionably.

Elizabeth approached the fearsome man and realize that he was indeed her father and not to mention a pirate. The pirates, Captain Jon, and Elizabeth left the commuting ship. The passengers were shocked to see Elizabeth leave with the crew but also realized that life on the sea was where she belonged.

Aboard the ship, Jon and Elizabeth strengthened their innate bond telling their various stories on and off the sea. Elizabeth was accepted by the crew and given the sobriquet of Cutlass Bess. She followed in her father’s footsteps fighting to protect the pirate empire. She became one of the most cunning and daring pirates in all of the Caribbean as well as the first female on the Pirate Council.