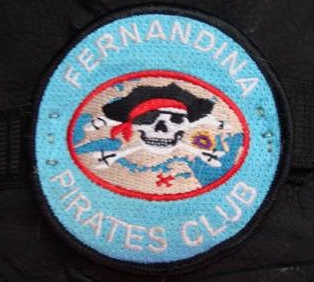 Members of the Fernandina Pirates Club wear a patch, usually on their hat, arm or boot, to show that they are actual members of the Fernandina Pirates Club. During the Shrimp Festival, you may see many different pirates. There are short pirates, tall pirates, pirates wearing many colors, pirates with pistols, pirates with swords, male pirates and female pirates. Pirates come from near and far for the Best Beards Contest, for the Little Pirates Contest, to see the parade, or just to come and play pirate.

As the proclaimed Goodwill Ambassadors to Amelia Island and Nassau County, the Fernandina Pirates Club proudly promotes the Isle of Eight Flags Shrimp Festival. The Pirates will be invading before the fireworks show on Friday night and again on Saturday afternoon. In between and on Sunday, you will find club members at the waterfront, the Kids Zone, and everywhere in between, always ready and willing to pose for pictures.

When you spot a scallywag, wearing a Fernandina Pirates Club patch, wanderin’ the streets during the 50th Annual Isle of Eight Flags Shrimp Festival, don’t be afeared, they are your hearties. Just walk up and say Ahoy! or maybe Arrr!