The Fernandina Beach Police Department is actively investigating the shooting death of a 67 year old man outside his residence at 1123 Gum Street. Johnell Richo was pronounced dead at the scene after witnesses heard gunshots at 6:38 AM and called police.

Investigators are now interviewing family members and witnesses and are trying to piece together a potential motive, as well as explore other possible scenarios. Detectives want to speak with anyone that might have information about this incident, or an incident that occurred at 3:00 AM yesterday morning in front of 909 S. 12th Street.

The Fernandina Beach Police Department has arrested an individual in connection with an armed robbery incident that occurred at 909 S. 12th Street at 3:00 AM yesterday morning.

John Patrick Wilson, 52 years of age, formerly of Fernandina Beach and recently of Knoxville, TN was charged with Attempted 2nd Degree Murder and Armed Robbery. Wilson and his wife claimed to be visiting with his mother and stepfather, Robbie and Johnell Richo, at 1123 Gum Street for the Shrimp Festival weekend. Johnell Richo, 67 years of age, was shot and killed early this morning outside his Gum Street home. 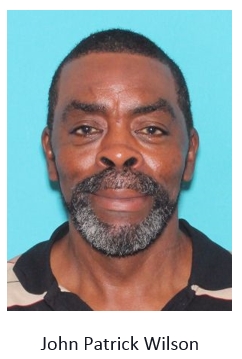 According to witnesses, Wilson approached two victims, Larry Javon Roberts and Jerrald Jevon Owens, as they sat on the porch at 909 S. 12th Street at 3:00 AM early Sunday morning. Wilson reportedly pointed a .22 Caliber rifle at the victims and demanded money, before firing at least one shot. Roberts struggled with Wilson for control of the rifle and two more shots were fired. Roberts was able to hold Wilson until law enforcement arrived. Wilson was transported to Baptist Nassau and then flown to UF Health in Jacksonville, believing that he had been shot in the head during the struggle.

Wilson refused to talk with law enforcement and was able to walk out of the hospital after being discharged just a couple of hours after being admitted. The wound to his head was not caused by a gunshot and was not life threatening or even considered very serious.