Ferrari's Mauro Forghierri joins the Amelia's Ferrari vs Cobra, The Battle for the World Championship for Sports Cars Seminar 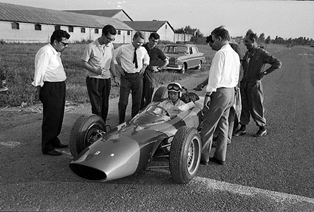 At the age of just 26 Forghieri, the son of a Ferrari tool and pattern maker, found himself a survivor of the infamous Ferrari racing department purge of 1961. Despite Forghieri’s age Enzo Ferrari promoted the young Modenese to chief engineer of the racing department.

Forghieri’s long tenure produced some of Ferrari’s greatest racing cars and a string of World Champions in Grand Touring, Sports Car and Formula 1 competition. In 1962 Forghieri got immediate results upon completing development work of Ferrari’s iconic GTO and saw it win the 12 Hours of Sebring, its first race. By his 30th birthday Forghieri’s Ferrari prototypes had won Le Mans and delivered world championships to Modena in 1963, ’64 and ’65.

Forghieri’s masterpiece is Ferrari’s 312 series of Formula 1 and Sports racing cars. The Ferrari 312PB prototype sports car earned the 1972 World Championship of Makes, winning every race the 12-cyliner prototypes entered during 1972. That was prologue for his brilliant Ferrari 312T that won the Formula 1 World Constructors Championship in 1975, 1976 and 1977.

Forghieri was the last of a rare breed of engineers who designed the entire car. He designed 15 Ferrari F1 racers from the tiny 1.5 liter Grand Prix cars of the early Sixties to the dawn of Formula 1’s 1000-hp Turbo Era in 1981.

“Friday’s ‘Ferrari vs. Cobra’ seminar will be an unblinking look inside one motorsport’s bitterest rivalries,” said Amelia Concours founder and Chairman Bill Warner, “A group like this has never been assembled before; this will never happen again.”