Environment, In the News, Latest News

Some very reliable sources were playing golf when they snapped this photo. "Wild Amelia indeed!" 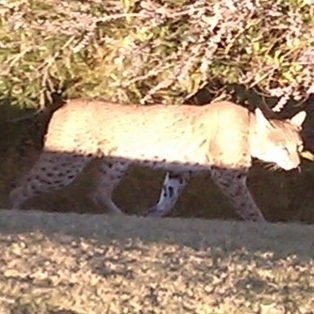 If you think there are no bobcats on Amelia Island, think again! Our sources took this picture this past Thursday while playing golf at the Amelia River Golf Course. The large cat was on the golf side of the airport’s fence, only about 20 yards from the foursome.

Florida’s native wild cat, bobcats, are entirely carnivorous and prey upon small animals such as rabbits, rodents, and birds. Occassionally they will prey on large animals such as white-tailed deer. Weighing 15-35 pounds, bobcats are much smaller than panthers and have much shorter tails than the Florida Panther. Bobcats are found throughout Florida and are not listed at the state or federal level as threatened or endangered.

The Bobcat is a warm-blooded and territorial. Bobcats can most likely be found in every county in Florida and in most states in the country. Due to its abundance in Florida, it is classified as a fur-bearing game animal by the Florida Game and Freshwater Fish Commission and can only be hunted during certain months of the year.