How will BP's Insurance Fund react when the first loss of revenue claims from coastal property owners come in? 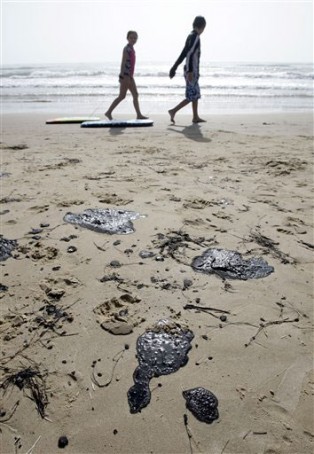 Oil on these magnificent Panhandle Beaches

I read an article today in the business section of the paper, the only section I still read.  The headline read, “Gulf Property sales sink on fears of oil”.  Folks this was bound to happen even if it’s short term thinking. The first thought wold be why would anyone want to purchase a beach property knowing there is oil that will be washing ashore, if it isn’t already?  Are inland properties selling in the area of the Gulf?  Sales are down all along the coast, but the coastal properties have taken the brunt of the hit. So what are these property owners to do?  What about the owners who depend upon summer rentals to survive, that income is now gone, flat?  How long can they last on savings? Are their lenders understanding or are they going to push them. Would this be a viable claim for the $20 billion BP Insurance Fund. I would think so.

The article went on to say that the Legislature may call a special session to address the real estate taxes along the coast.  One idea on the table is property owners would only be taxed on the current value of their property instead of the value prior to the spill. Okay for starters but I do have a question.  Lets say you own a commercial building several blocks from the ocean, your business is down by seventy percent, will there be any relief for you? Tax relief or otherwise.

The idea behind the special session would be to pass the difference on to BP for payment.  What about the properties that are currently on the market for sale that now are not going to sell, will BP buy them or make up for the difference? And if so would owners yell “Mannah from Heaven”? How about the real estate companies who had buyers looking at properties prior to the spill, will they be made whole for the business they have lost?

This is like a fungus that continues to grow, and it will get bigger and bigger just as the oil slick in the Gulf. The oil has not entered the “loop” of the gulf stream as NOOA actually shut down this prediction for now because of an “eddy” preventing this. But this story is not done yet and when the slick will be heading up the east coast, we’re talking front yards from Key Biscayne, Miami Beach, Lauderdale up to West Palm from where the Gulf stream moves north easterly to hit the South Carolina Coast.  There are potential buyers who have put their plans on hold for now to even look at property in Florida, anywhere along the coast because of the oil.

One final question; what damage would a hurricane do when it is going to hit in the Gulf?  Stay tuned, there will be much more to this story as time moves on. But smart ones among us will buy short sale properties with cheap mortgages and present a loss of revenue bill to BP.