Football Season has Begun in the South 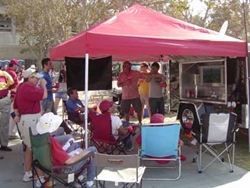 Football season has officially begun in the south. College football in the south is very different than it is up north. For those who are planning a football trip to the south this season, here are some helpful hints.

Women’s Accessories:
Carry a Louis Vuitton duffel with two lipsticks, waterproof mascara and a fifth of bourbon. Money is not necessary – that’s what dates are for.

Parenting:
In the south we expect their daughters to understand pass interference.

Getting Tickets:
About five months before the game you will need to walk into the ticket office on campus, make a large financial contribution, and put name on a waiting list for tickets.

Friday Classes After a Thursday Night Game:
It is likely the teachers may cancel Friday classes because they don’t want to see the few hung over students that might actually make it to class.

Parking:
Arrive early, the RVs sporting their school flags begin arriving on Wednesday for the weekend festivities. The really faithful arrive on Tuesday.

Tailgating:
Don‚Äôt be surprised to see a 30-foot custom pig-shaped smoker fired up at dawn. Cooking accompanied by live performance from the Dave Matthews Band… all of whom come over during breaks and ask for a hit off bottle of bourbon.

Getting to the Stadium:
Don‚Äôt worry, you’ll hear it. On game day it is the state’s third largest city.

After the Game:
Another rack of ribs goes on the smoker, while somebody goes to the nearest package store for more bourbon. Planning begins for next week’s game.