My son, daughter and husband have committed to the challenge which could bring them a nice cash prize at the end. 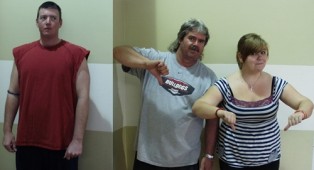 This week brought the start of the Forever Fit Challenge 2011, sponsored by CLUB 14 FITNESS. My son, daughter and husband have all committed to the challenge by entering the contest which could bring them a nice cash prize at the end.

SearchAmelia will once again be following contestants as they take the CLUB 14 FITNESS Forever Fit challenge and begin making changes that will last a lifetime!

If you followed our video series last year, you have already met our son, Alex. He finished in 2nd place in last year’s challenge and has continued losing through the year and his goal weight is now in sight. Having tipped the scales at 297 pounds last year, he lost an astounding 46 pounds in the eight weeks of the contest. Since the contest ended he has continued to go to CLUB 14 FITNESS and work out on a regular basis. He has once again entered this year’s contest because he feels it will give him the motivation to rid himself of those final, oh-so-hard to lose pounds.

This season we also follow my husband, Lawrence, and our teenage daughter, Ally; both are determined to win first place! Me? I will be playing the home version of the game to reap the benefits of my entire family being motivated to get fit. We are all familiar faces at the gym, but for the next eight weeks we will be stepping up the pace.

We realize that is also our family’s eating habits that are in need of a major overhaul! These are lifestyle changes! Over the past year every member of our household has been weaned – first from 2%, then 1% dairy milk to finally making the switch to almond.

Will we survive Super Bowl Sunday as we attempt to avoid the tasty bar-b-que wings, cheese stuffed jalapeno, pizza and beer?

Along the journey we will be sharing our tips, recipes, frustrations and triumphs. We have an interesting eight weeks ahead of us, so hop aboard and fasten your seat belts, it’s going to be a great ride! (Now to figure out what to do with this avocado!)