When it comes to figuring out the bigger-picture, longer-term moves for whole investment classes, there's nothing better than watching a few key economic indicators. 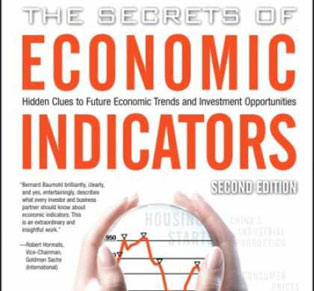 When it comes to figuring out the bigger-picture, longer-term moves for whole investment classes, there’s nothing better than watching a few key economic indicators. There are four indicators that are the most important and that you should pay attention to. We tend to get a little detached from the ‚Äúreal‚Äù world here on our Amelia Island paradise. These inputs might help you with what‚Äôs up‚Ä¶‚Ä¶

U.S. Employment Numbers from The Bureau of Labor Statistics

While weekly unemployment claims are somewhat important to the markets, the major employment dipstick is what we get from the Bureau of Labor Statistics every month. In the “Current Employment Statistics” report we hear what 150,000 businesses and government agencies are doing with worker levels, hours, and earnings. In the separate monthly household survey, which is officially called “The National Employment Situation,” we get the actual unemployment rate. It’s expressed as a percentage of the overall labor force … and it’s the number most of us are familiar with hearing.

According to the August measures, the national unemployment rate rose to 9.7 percent, the highest level since June of 1983, while employers cut 216,000 jobs. Pay close attention to these releases going forward. By knowing whether there were more or less jobs in the economy in the previous month, you can then adjust your expectations for other data accordingly.

This quarterly number measures our country’s economic output from all manufacturing and services. It is reported as an annual number in “real” terms, meaning that it is adjusted for inflation. Much ado is made about the GDP releases, because they are used as the basis for the textbook definition of a recession (two consecutive quarterly contractions).

However, one of the things that many investors fail to realize is that each GDP release is eventually subjected to two subsequent revisions. That means the original number reported is not the only one to watch. GDP is still what most people mean when they refer to economic growth, and its effect on investor sentiment is huge.

This group of government bankers gets together about eight times a year to talk about the current state of the economy as well as its future prospects. Meetings are on Tuesdays, and sometimes into Wednesdays. The Fed issues a statement at the conclusion of every meeting and the market dissects every single word of it. This is also when interest rate actions are most likely announced. Obviously, those have a huge market impact. Much of what’s happening in each individual Federal Reserve district is contained in the Fed’s so-called “Beige Book,” which is released on a lag. Likewise, each meeting’s minutes are disseminated to the public later. If you want to know how localized economies are holding up, the Beige Book is very helpful. And the FOMC minutes (Federal Open Market Committee) are a great way to sense what the Fed’s next move might be.

As it stands right now, the Fed is unlikely to make a major interest rate move anytime soon. In fact, at their meeting last week, they had the following to say: “The Committee will maintain the target range for the federal funds rate at 0 to 1/4 percent and continues to anticipate that economic conditions are likely to warrant exceptionally low levels of the federal funds rate for an extended period.”

Of course, you cannot always take what the Fed says at face value, but sometimes it actually means what it says.

Watch the Inflation Rate Via the CPI and PPI!

The Consumer Price Index (CPI), which is released every month, is still important to the markets, because it’s a reliable benchmark for inflation, no matter how much it’s understating things. And the Producer Price Index (PPI) is also significant because it measures what businesses are paying for things. As such, it is a good front-runner to the CPI. Like the CPI, it’s based on a basket of goods, and is reported in a “headline” version as well as a “core” version. The latter excludes food and energy prices.

Both PPI and CPI are expressed as percentage increases or decreases, both against the previous month as well as against the same month a year earlier. It’s worth noting that ‚Äî after showing some outright price declines in many categories during the height of the credit crunch ‚Äî these two inflation gauges have been showing renewed increases. For example, in the latest batch of data released on September 15, PPI advanced 1.7 percent and CPI gained 0.4 percent.

A Couple of Important Points about These Four Items

First, they’re released by the government and therefore not necessarily perfect measures.¬† You cannot just accept the government’s measures of other items, either. Many reports suffer from flawed assumptions. However, with a grain of salt, these numbers can at least help you form a baseline opinion of what’s happening out there.

Second, some of these items are lagging indicators. GDP and unemployment tell us what has BEEN happening … not what is about to happen or even what is happening now. But when we’re trying to contextualize our long-term investment decisions, they’re still extremely useful. And when you use them to frame other short-term indicators and data items, you’ll be better able to draw reasonable conclusions.