From Our Family to Yours 2012 Finale

The grand finale of the 2012 Amelia Island Chamber Music Festival will clearly show that musical talent often runs in the family. 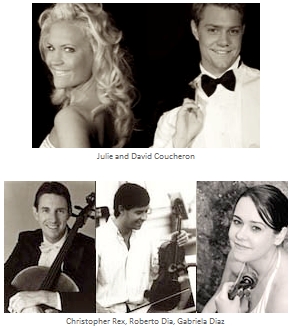 Mouth of Amelia invites you to the Grand Finale Concert of the 2012 Amelia Island Chamber Music Festival with From Our Family to Yours!

WHAT: The grand finale of the 2012 season of the Amelia Island Chamber Music Festival will clearly show that musical talent often runs in the family. From Our Family to Yours teams brother and sister, husband and wife and two brothers performing music of Vitale, Borodin and Chausson.

WHO: Our brother and sister combination is David and Julie Coucheron. Violinist David, concertmaster of the Atlanta Symphony Orchestra, regularly performs in some of the world’s most impressive concert venues, including the Wigmore Hall, Carnegie Hall Weill Hall and The Kennedy Center. Julie has established an international career and won first prize in all the national competitions she has attended. She has played in most of the major music capitals in North America, Europe, South America and Asia. The sibling duo has performed around the globe and won the prestigious EMCY Jugend Musiziert duo competition in Weimar, Germany.

Elissa Koljonen and Roberto Diaz are our husband and wife pairing. A celebrated violinist, Elissa Koljonen has thrilled audiences and critics in over 100 cities around the world. She initially received international acclaim upon becoming the first recipient of the prestigious Henryk Szeryng Foundation Award and silver medalist of the Carl Flesch International Violin Competition. Roberto Diaz is a violist of international reputation. He holds the prestigious position of President and CEO of the Curtis Institute of Music. Mr. Diaz is the former principal violist of the Philadelphia Orchestra.

Our brothers are Christopher and Charles Rex. Christopher, general and artistic director of the Amelia Island Chamber Music Festival, has been principal cello of the Atlanta Symphony Orchestra since 1979. Charles previously served as associate concertmaster of the New York Philharmonic under Zubin Mehta. In addition to his career as a soloist, Mr. Rex was guest concertmaster of the London Symphony under Sir Colin Davis.