On Saturday night, Amelia Island's clear skies should be optimal for viewing the biggest moon we have seen in 18 years. 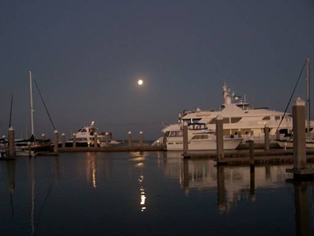 If you happen to be out on the beach Saturday night, the rising full moon may seem a bit bigger than usual. On Saturday night, Amelia Island’s clear skies should be optimal for viewing the biggest moon we have seen in 18 years. This is because the moon will be about 221,567 miles away from Earth which is considerably closer to its average distance from the Earth which is about 238.000 miles.

Astrologer Richard Noille nicknamed the event, also called a lunar perigee, a “supermoon” in the 1970s. The term is used to describe a new or full moon at 90% or more of its closest orbit to Earth. Saturday, it will be at 100%.

Since the full moon is known for making changes in the tides, this supermoon, which coincides with the spring perigee (when the orbit of the moon is closest to the Earth), will result in higher and lower tides as seen in the chart. 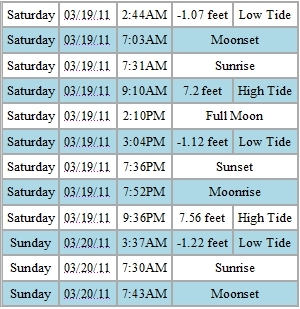 Later this year, on October 11, the full moon will closely coincide with apogee, its farthest point from the Earth.

I see the bad moon arising.
I see trouble on the way.
I see earthquakes and lightnin’.
I see bad times today.
~Creedence Clearwater Revival

Partially due to the earthquake and tsunami in Japan, there has been some speculation that the tidal surges caused by the supermoon may increase the incidence of earthquakes and volcanic activity, but scientists have never found the moon to be the cause of natural disasters. Full moons are paired with wolves howling and dogs barking. They are also said to bring on violence, or other changes in human behavior, but this has not been proven either.

The best time to view the supermoon it will be near the time it rises at 7:52 pm on Saturday and it is relatively low on the horizon. It will be more difficult to tell that the moon is around 14 percent bigger and 30 percent brighter when it is further up in the sky later in the evening. Make a point to check it out as the moon will not be this close to Earth again for another five years. Enjoy the view and be sure to howl at the moon!