January 30th is the date you want to be in Tampa if you love pirates. Gasparilla is a site to be seen! 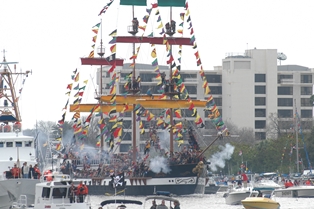 Whether you call it Gasparilla Days, the Gasparilla Festival, or the Gasparilla Pirate Fest, Tampa, Florida knows how to put on a show. Traveling to Tampa from the Jacksonville area is a perfect weekend outing and January 30th is the date you want to be in Tampa if you love pirates. This huge festival is a site to be seen!

“We are honored to have COLLECTIVE SOUL headline our Pirate Fest Stage in the newly re-opened Curtis Hixon Park along the Hillsborough River in downtown Tampa,” said Darrell Stefany, President of EventFest, Inc. Gasparilla features an expanded parade route along Ashley Drive ending at Cass Street this year. We are blessed to have this exciting new special event space in downtown on the RiverWalk for our Community to enjoy, and combining the Gasparilla Parade of the Pirates with COLLECTIVE SOUL as our Pirate Fest Stage headliner confirms that downtown Tampa is the best location to enjoy all the Gasparilla festivities in 2010. 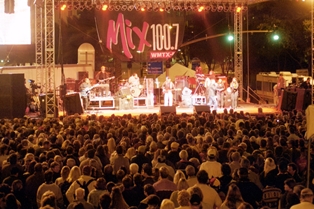 “Mix100.7 is extremely excited to get such a BIG ACT for this year’s Gasparilla celebration! COLLECTIVE SOUL is a solid, class act that appeals to so many life groups‚” said Doug Hamand, Operations Manager, Clear Channel Radio. With such smash hits like The World I Know‚ December‚ Shine and their latest hit Staring Down this should be a great show for everyone going to this year’s event!‚”

COLLECTIVE SOUL recently released their self-titled 8th studio album in August of 2009 and will release their new single ‚”You‚” in January 2010. For information on the multi-platinum band hailing from Atlanta, Georgia please visit www.CollectiveSoul.com.

About the Gasparilla Parade of the Pirates: Following another successful invasion by the pirates of Ye Mystic Krewe of Gasparilla, the focus shifts to beautiful Bayshore Boulevard, where a victory parade begins at 2 p.m. at Bay to Bay and Bayshore. The 4.5 mile Gasparilla Parade of the Pirates, which has been presented by Ye Mystic Krewe of Gasparilla annually since 1904, winds its way along Hillsboro Bay into downtown Tampa, with over 140 units ‚Äì featuring approximately ninety (90) floats, marching bands and over fifty (50) participating social organizations (i.e. krewes). 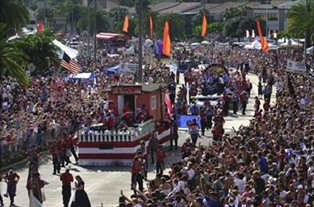 Parade of the Pirates

Additional entertainment stages will be located at Platt and Bayshore (Invasion Stage) and at the Hyatt Regency Tampa (Whiting and Franklin) in downtown Tampa. Entertainment schedules will be released in late December detailing performance times and musical genre for each location.

About Gasparilla Reserved Tickets: Reserved Gasparilla bleacher seating tickets are $30, per person (tax included). For additional information or to purchase Gasparilla Invasion Brunch, Gasparilla Parade tickets and/or officially licensed Gasparilla merchandise, please log onto www.GasparillaPirateFest.com and click on the “Tickets ‘n Treasures” link to be directed to the Gasparilla shopping cart. Tickets can also be ordered over the phone by calling EventFest Gasparilla Ticket Reservation Line at (813) 251-8844. A ticket representative will be available between 9 a.m. and 5 p.m., Monday – Friday.

Reserved Seating for the Gasparilla Invasion Brunch and Parade is limited, and has been relocated in many areas for the 2010 event. All reserved tickets are assigned in the order they are received, therefore guests should order their reserved tickets early to best accommodate any seating preference they may request.

Seminole Hard Rock Gasparilla Pirate Fest Sponsors as of the date of this release include: