Miss Shrimp Festival, the Fernandina Pirates and our own Ally at the Desk will be in the televised Gator Bowl Parade on New Year's Eve. 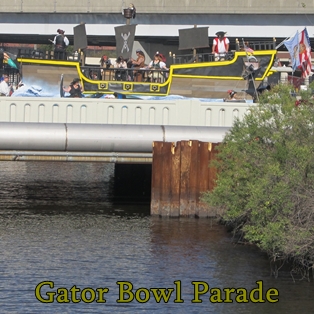 Featured in the parade, of 44 committee selected entries, is the Miss Shrimp Festival scholarship winner Alyssa Whitfield. Alyssa is majoring in marketing at the University of Florida and is joining the Fernandina Pirates Club aboard their ship, Amelia’s Revenge.

Also appearing in the parade from Amelia Island is the Jacksonville Zumba Instructors Network entry organized by Fernandina Beach High School senior, and Zumba Fitness instructor at CLUB 14 FITNESS, our own Ally at the Desk.

The parade route returns to pass near the Jacksonville Landings this year and will run from the shipyards along E. Bay Street to end at S. Pearl Street. Bleacher seating is available for $10.00, and is located just west of the Landings.

For nearly 70 years the Gator Bowl Association, a 501 (c)(3) not-for-profit organization, has offered the best in college athletics and related activities in order to maximize positive impact on the area’s economy, national image and community pride.

The Gator Bowl game is the 6th oldest college bowl game and the first ever to be televised nationally coast-to-coast. Our own Amelia Island Tourist Development Council is a proud partner of this exciting event!

Mississippi State and Northwestern will face off in the Gator Bowl played at Everbank Field in Jacksonville, Tuesday, January 1, 2013. The game will kickoff at 12:00 noon and will be televised nationally on ESPN2.