Ghost of the Blues at the Florida Theatre

Ghost of the Blues

<em>Ghost of the Blues</em> is a musical revue featuring professional touring musicians paying homage to Blues legends that have passed on to Blues Heaven. 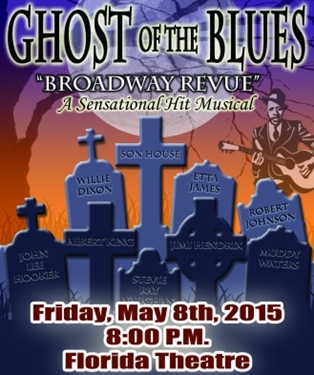 “From Beale Street to Broadway, the Revival of the Blues.” That’s what Producer Randy Knight along with Co-Producer Jeff Malone, President of the Amelia Island Blues Festival and the Northeast Florida Blues Society, have cookin’ on their Ghost of the Blues production traveling nationwide with the next event at the Jacksonville Florida Theatre on Friday, May 8th, 2015 at 8:00 pm.

Ghost of the Blues is a musical revue featuring professional touring musicians paying homage to Blues legends that have passed on to Blues Heaven. “It’s all about celebrating the musical legacy of the Blues Pioneers responsible in producing the roots of American music today” said Malone.

ACT I takes place in a graveyard not far from where Robert Johnson made his deal with the devil in order to become the greatest bluesman ever. See Robert Johnson, and then progress through Blues history with John Lee Hooker and Etta James belting out the boogie and the hits that morphed the Blues into Rock n’ Roll.

ACT II changes the stage into a juke joint where Willie Dixon, Little Walter, Albert King, Koko Taylor and others entertain you with a spontaneous explosion of the Blues like you would see “back in the day” when American Blues ruled the world!

See and hear what it was like at an authentic blues revival, brothers and sisters of the Blues, when Ghost of the Blues comes to life on the stage of the Jacksonville Florida Theatre on Friday, May 8th, 2015.

This is the only appearance in Florida this season!