Whether you're a gold bug or a silver buff, you've been a happy camper so far in 2009. 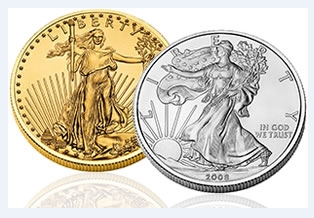 The upward trend has many investors going long in both metals, but there’s more you can do with gold and silver than just buy and hold. You can also play the two metals off one another‚Äîbut to do it successfully, you must first understand the ever-changing gold/silver ratio.

But if you change the time period, that average changes. In the last 12 years the ratio has held closer to 60:1, meaning that it takes lots more silver to buy one ounce of gold. And in just the past three years, the ratio has fluctuated from 45 to 85, driven by the volatility in the prices of the metals themselves.

As of Friday’s close, the gold/silver ratio was sitting slightly above 60. 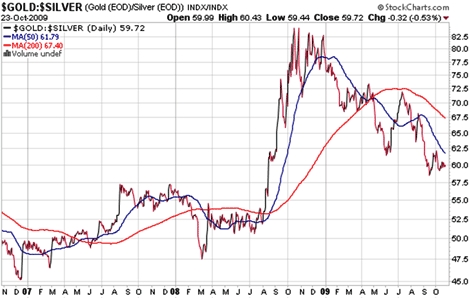 Just looking at the ratio alone tells you nothing‚Äîit’s just a number. It’s only after you factor in the dimension of time and the price movements underlying the number that you can make sense of the gold/silver relationship.

What’s Driving The Ratio Down?
The gold/silver ratio will drop if either: a) gold decreases more than silver does, or b) silver increases more than gold does. This latter case is what we’ve seen so far in 2009. Since the beginning of the year, both metals have had great returns, but silver has outperformed gold, increasing 56 percent year-to-date while gold only increased 20 percent. Consequently, that has pushed the gold/silver ratio down. Just how low can the ratio go? Can it return to its historical average of 30:1? 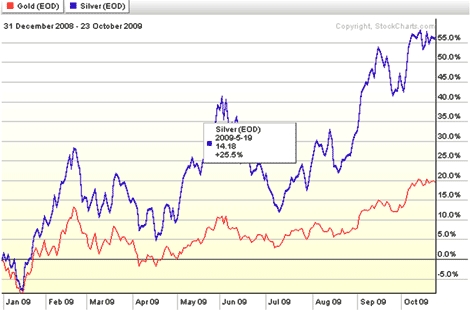 The ratio play right now is: Silver’s strong for fundamental reasons, while gold might be verging on bubble territory. I’ll leave it to you to decide whether you believe that story, but for the near term at least, it looks like the gold/silver ratio will stay on its downward path.

Some die-hard precious metals collectors approach the ratio literally, managing physical stores of the two metals based on ratio targets. This is a strategy for those who are fortifying their bunkers, preparing for the end of the financial system as we know it and the subsequent return of the gold standard.

With this strategy the ultimate goal is simply to increase the number of ounces of gold held, without any real regard for price. For example, let’s say the gold/silver ratio is currently at 60, but you think it’s going to 30. You can then sell one ounce of gold for 60 ounces of silver, and when the ratio hits 30, You can use the 60 ounces of silver to buy two ounces of gold. Voila! You have doubled your physical gold holdings.

But if the ratio goes to 120 instead, your 60 ounces of silver only buy me half as much gold as originally held.

So if you’re a true believer in the ratio and its continued collapse, it’s definitely possible to put a lot of money to work that way. As always, be careful.