The first mate groaned as she wrestled both a sizeable Grouper and a huge Seabass over the gunwale and into the boat. 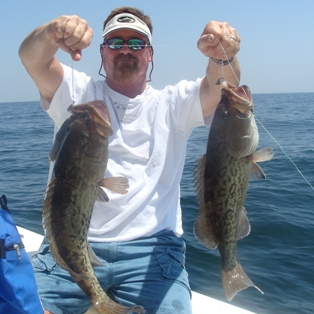 Strong west winds kept us from heading offshore early last Saturday so we looked for menhaden (pogies) around the pier at the south end of Amelia Island in hopes of castnetting enough live bait to troll the beach or fish for Redfish at the jetties. The bid for pogies failed. They were there as evidenced by an occasional flip on the surface, but not schooled up tight enough to throw my net around them. Since the wind had laid down a bit, we elected to try a run offshore with the frozen squid and mullet we had.

As we got under way I was scanning the area for free swimming cobia as I mentioned in last week’s article when out of the corner of my eye there was a monster cobia swimming right on the surface, but at 40 MPH it was hard to relocate the fish when we doubled back.

My heavy spinning rod had a 4 ounce bucktail jig and a large whole squid on the ready, but no cobia could be found. We then headed to a live bottom area about six miles off the beach. 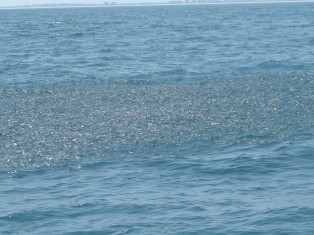 Luckily we ran into a large pod of Greenies (pictured) and used a Sabiki rig to procure a few for the livewell. Our first drop on a small ledge produced a double header for the first mate (my wife, Debbie) of two huge Black Sea Bass and one slightly undersize Grouper. We boated several more large Bass then headed to another nearby area stored in my GPS but on the way I noted a dome shaped area on the bottom recorder which looked fishy and we quickly dropped down with both live Greenies and squid on double bottom rigs. The first mate began groaning and then shrieking as she wrestled both a sizeable Grouper and a huge Seabass over the gunwale. I wasn`t much help as my deeply bent heavy bottom rod lurched about as a double header of large grouper flared their gills in an effort to slow down the inevitable trip into the boat. 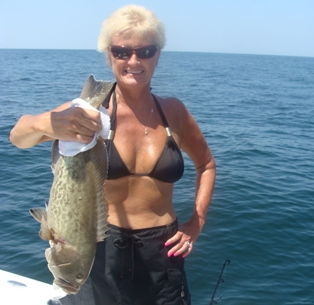 Chaos broke out as we both tried to unhook fish, measure, throw back and ice down the various Grouper and Bass. Several more drifts over the spot yielded undersize grouper and more large SeaBass. In an hour the fish had lost interest so we headed west with a full cooler and sore arms. Snapper season is still closed but you can now keep one grey grouper per person per day of at least 24 inches. One of these keepers will feed your family and make fish lovers of them all.

Don`t put it off, I have 30 years of local fishing experience, so call me now to get in on this action.