Greece has no choice now but to default and step out of the EU or risk a slow motion suicide. 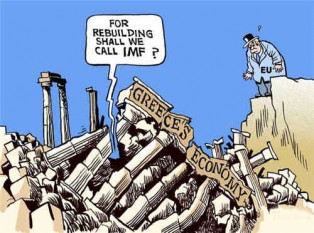 Hey Boss, NYPD answered the phone call to the IMF ??!!

Greece is back in the picture as a telltale of what maybe happening in fast forward mode to the global economy. Reminiscent of a Trojan Horse, Greece entered the European Union in 1981. With a debt position crossing 150% of the country’s GDP which is in decline as it is, the country’s efforts to borrow money in the financial market may result in a big zero. Everyone holding Greek debts at this point knows, that a complete write-off and an exit form the EU is the only way out for Greece. But that is not necessarily the view of banks eager to lend money in exchange for political influence.

And that will not be the end of the revolving door that is rapidly becoming the Eurozone’s Survival’s Problem.
History recalls that ideological differences create wars (economic and military) and constantly shifting loyalties, often based on nothing else but promises from untrustworthy politicians.

Take for example the origins of what today is called the Eurozone. With the advance of the Industrial Revolution in the mid 1800’s coal and steel were the two commodities to push the Industrial Age forward. The large deposits in mainland Europe were concentrated in the Rhein Ruhr Area of Germany, down to the Alsace Lorraine in Northeast France, Easter Belgium (especially in the Wallone region of the country) and a hillside area in the south of the Netherlands called South Limburg. Other deposits were found in a triangle area of Southwest Poland, what is today part of the Czech Republic.

You may also recognize these areas as the main battle grounds during both World Wards. Politically the scenes in this part of the world were dominated by the French-German animosity. When everything was said and done after Worldwar II, American influence forced cooperation between France and Germany to promote industrial productivity, which lead to the European Organization of Coal and Steel, the frontrunner of the European Community. Five years later in 1953, the European Community was formed with 6 members: Germany, France, Italy, the Netherlands, Belgium and Luxembourg. Except for northern Italy, the Mediterranean Rim Countries were considered backwards both economically and politically. Having grown up in the Limburg Coalmine area, I cannot even reminder anyone going on vacation anywhere else but the French Riviera or Southern Italy’s beaches. Yes we went on vacation from the mid fifties on. But Spain, Portugal, Greece or the Balkans were out of the question because they were ruled by dictators, strongly supported by America in its effort to keep Communist Russia out of the European Mediterranean coastline.

French Colonies in N.Africa were part of the first European Community

Military junta rulers such as Salazar(Portugal), Generalissimo Franco (Spain), Marshall Tito (Yugoslavia) and Colonel Papadopoulos (Greece) had nothing to offer to a fairly democratic organization such as the European Community. But over the next 20 years as the 6 members of the Community prospered, its populations started taking vacations in these countries, in the end forcing the hand of dictatorial policies and by the mid 1970s, Portugal, Spain and Greece became parliamentary democracies on an economical rebound.

And that is where the essence of rebound politics takes over. Rebounders may have honorable intentions to some degree, but these intentions will soon change into greed and status as they taste power that can be imposed upon a disinterested majority of the population. Greece is a perfect example of that human frailty and now as they are looking the beast of recurring “poverty” in the eyes once again, we should remember that they once invented the Trojan Horse, filled with hopefuls willing to give their life for the promise of a piece of the pie.

And that is the sad part of humanity’s future, it’s called Forlorn Hope.
During the era of muzzle loading wars (no tanks, airplanes, missiles etc.) a fascinating military tradition arose around the final stage of besieging castles and fortified towns. While it had other names, in other places, in the Napoleonic Wars the tradition became known as the Forlorn Hope, best described as: Hoping, often against all odds, that you will survive and benefit from a better future.

It was typical that as the attacking force approached, the defenders retreated within the walls and buttoned up tight. Refusing any offer of surrender, the attackers then proceeded to encamp and start building earthworks and trenches. As the days drew on, the attackers would dig and build and push their fortified trenches ever closer to the walls of the castle. From their vantage point on the walls of the fort, the defenders would monitor the steady progress of the trenches as they snaked closer. 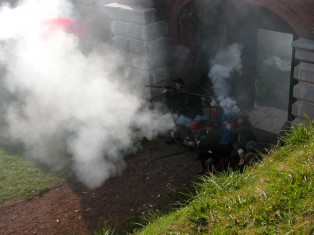 Facing a turmoil now or later.

Naturally, the defenders would attempt to disrupt the diggings through raids and by directing fire at the work parties, but properly engineered, the earthworks were remarkably resilient.
And so, day after day, the defenders watched as their fate inched inexorably forward. Until the day arrived that it was clear that the earthworks had reached the base of the castle and, as a consequence, the attackers shifted from digging to transporting explosives into the cavity scraped out at the foot of the wall. At that point, it became obvious to all that the endgame of the siege was about to begin, as well as almost exactly where the attack was to occur.

Consequently, the defenders made final preparations on the opposite side of the wall where the breach would be made, setting up barricades lined with cannons loaded with grape and chain shot, all to better unleash a fiery metallic hell at the breach in the wall, once it opened.

It was at this point that officers in charge of the attacking force would issue a call for junior officers and soldiers to join the Forlorn Hope – an entirely volunteer force to rush first into the breach created by the sappers setting off the explosives under the wall.
Remarkably, as historical records show, there was never a shortage of volunteers for a Forlorn Hope, even though by definition it meant volunteering to rush straight into a hailstorm of projectiles with very little chance of survival.

So, why would anyone be so insane to sign up for what was almost certain death?

While most Forlorn Hope participants didn’t live to do an exit interview, one can assume that they volunteered to take advantage of certain enticements offered for those who stepped forward. For instance, a junior officer, on survival, would immediately be promoted by one or more ranks, a quick trip to better pay and significantly higher status in a world where status meant much. And even the foot soldiers would be treated like minor royalty on the eve of the assault, and, on surviving, receive possible promotions and cash bonuses.

Now, I ask you, if in exchange for a bit of cash and career advancement, people are willing to rush into almost certain death, why would anyone question the innate character of us humans to make decisions, even ill-advised ones, that we think will lead to improving our circumstances?

It’s why there are individuals in Saudi Arabia willing to sell illicit drugs, even though being captured means a quick trip to the chopping block. It’s why drug mules swallow plastic balloons to smuggle the stuff with a high risk of overdosing. It’s why whole Mexican families risk traversing 100 miles of West Texas desert in 120° scorchers for a shot at a better life. It’s why people get stuffed into a shipping container for 3 weeks in the hope of surviving and a better future. It’s why 100 people are stuffed on a 30 ft boat to cross oceans for a potentially better shot at life.

I can continue, but I think you got the message.

There is another side to this picture which explains why the more governments tax, the more people will cheat on taxes. And that is one of Greece’s (and many other countries ) major problems.

Besides a massive sovereign debt and the country having turned entirely non competitive, Greeks massively evade paying taxes is just adding to the realization that Greece will never be able to pay down its debts or even the interest on its debts. Greece should have never been invited to enter the Eurozone and consequently it can only do what Iceland did last year; tell its creditors that they’re sorry they lost their money and direct their grievances to Goldman Sachs and their cronies and devalue its currency. Anything else, such as a drastic decrease in pay scales causing a 10 year depression will amount to slow motion suicide, a sacrifice the Greek (and Spaniards and Portuguese) will not welcome without a forlorn hope fight.