Feature, In the News, Money and finance, News

As experts keep warning for both inflation and deflation scenarios, it becomes clear that 1950 economic tools have no answers for 2010 problems. 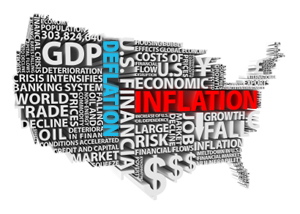 Inflation and Deflation is Stagflation

Inflation is often explained as the percentage that life gets more expensive or the rate at which the general level of prices for goods and services is rising, and, subsequently, purchasing power is falling. A deflation is explained as a general decline in prices, often caused by a reduction in the supply of money and/or credit. Deflation can also be caused by a decrease in government, personal or investment spending. The opposite of inflation, deflation has the side effect of increased unemployment since there is a lower level of demand in the economy, which ultimately can lead to an economic depression.

Scary, isn’t it? Especially since we can all see these scenarios unfold around us in our daily lives.

Deflation causes unemployment, so let’s throw everything including the kitchen sink at the problem as to prevent that beast from eating our deserved prosperity, says Federal Reserve Chairman Bernanke. Insiders also know that a job requirement to become a Fed Governor seems to be a voluntary frontal lobotomy to take out any reference that deflation is a normal economic correction when money supply has allowed the economy to overheat for too long. Consequently we hear the words “not on my watch” while Bernanke announces another $600 billion in quantitative easing

Oh I’m sorry what was that? Quantitative easing?

Well it’s just a very expensive way of saying that the Federal Reserve will unload another freshly printed $600 billion dollar bills into the economy at zero to 0.25% interest for those who want to have it. No, not you of course. You already lost your credit score when you paid your utility bills three times a little late over the stretch of 12 months…and no not you either, since your house is listed as a short sale (never mind your mortgage interest rate is 8%) or you who gave your car back to the bank because you started out paying with deferred interest payments, but now that incentive is gone and you pay 18%.
Oh you own and operate a small business with 8 people and needed to create some financial breathing space? Humm, nah, we’re very sorry but unless you’re willing to jump through all these fire-lit hoops and collateralize everything down to the family heirlooms, we cannot help you.

And now the same people who bring us these uplifting words of compassion, are presenting us with the latest CPI information (consumer price index) last week, and guess what? It showed a continued drop in inflation. Surprise surprise! And of course they immediately point out that this justified the Fed’s visionary move to issue another $600 billion of free money. We have to get ahead of this deflation thing, n’est-ce pas?

Well, maybe, depending on how you measure and define inflation/deflation.

Not to take matters into the absurd, but Bill Clinton introduced a new way of thinking about definitions when he remarked that Monica Gate all depended on how someone defined Extra Marital affairs or what legal definition constitutes it. A girlfriend of our daughter found her fiance French Kissing another woman and broke off the relationship. Did it constitute a legal argument for the break up? Not really. Was she morally justified to end the relationship? Absolutely. It was the personal definition that initiated the action.

And similarly, whether or not we are in danger of deflation all depends on what your definition of deflation is versus the expectation of inflation. And for that, we first have to look at the recent headline numbers. What we find is that core inflation, at 0.6%, as well as trimmed inflation (which takes out the statistical outliers and anomalies) are both at post-war all-time lows. (funny that we all assume in this statement that Postwar means Post World War II, something we may have to change soon considering all the wars we fought between then and now).
But……another way to look at inflation is all-items inflation vs. core inflation, which is inflation without food and energy cost. The government economist use the malleable definitions at will or in line with the old Roman expression Quod Erat Demonstrandum – What needed to be proven.

Nobody Asked the Tough Questions

Back  in 2003, when deflation first became a concern. The Fed under Greenspan allowed interest rates to stay low “for an extended period of time” in order to make sure deflation did not take root. Notice that it was in late 2002 that Bernanke (at the time Greenspan’s second in charge) gave his famous “helicopter” speech on deflation. (He would load up helicopters with money to spread across the nation.) No doubt there was actually a very real concern in policy circles.
Question is if there should have been? Nobody asked the tough questions: What if the way we measure inflation was flawed in some regard?
What if inflation is a tool that varies by region because of cultural, technological, religious, educational and economical diversification.

Consider this: Is the CPI in California’s Silicon Valley comparable to Pennsylvania’s Lehigh Valley and is lifestyle diversity between Miami, Florida and Seattle, Washington really quantifiable in one Consumer Price Index that is used for monetary and economic policies?
Let me paint you a real life example.

When I moved to the Caribbean Islands in 1986 I offered my $10,000 plus corporate wardrobe to a Consignment Shop in Gainesville Florida. My Austrian Leaden winter coat, stacks of Kashmir and Irish Sheep wool sweaters and about a dozen Hand tailored three piece suits and a couple of Italian Calf leather pairs of shoes, reflected my northern big city corporate clothing requirements. The store offered me $75 for this package they were drooling over (which I took). I was going south and the only clothing needed were some t-shirts, shorts and flip flops. The consumer price index for clothing obviously has a different impact in various geographical areas. New York, the Northeast, the Midwest and Pacific Northwest have a much higher budget allowance for clothing than the sunbelt. Yet central government policy does not take that into consideration.
The impact of gas prices at the pump for a vehicle in driven daily on Florida’s flat roads is different from Colorado, Montana or West Virginia’s mountainsides and steep hills. Is this reflected in the CPI. No…

The thing is that inflation has come to cover such an enormous amount of influences, that absolutely no one understands anymore the causal relationship effects. If you have a spare minute over a can of coffee, go and download from the Bureau of Labor Statistics website the many ways we look at, and the many items we include in statistics, and you’ll understand why I think that the Feds are trying to fix a modern 2010 economy with tools made in the 1950s, based on theories that originated in the writings of a bunch of dead smart guys. But times have changed, economies have changed and our measurement tools have stayed behind; utterly flawed and out of date.

Even if I think that the US economy is so large that the $600 billion extra stimulus can be absorbed without too much direct collateral damage, the indirect damage to the dollar as the world’s reserve currency is incalculable at least at this point and therefore a grave risk. Some of my peers say that we won’t be negatively affected since we do have a large economy and the multiplier effect is at an all-time low, but I honestly think they are guilty of wishful, optimistic thinking, without any respite or safety margin, in case their optimism turns out to be misguided. Once the rest of the world crowns a new reserve currency, there is no road back. Oil will no longer be paid for in dollars and our pump prices will be $7-$10 a gallon, and that would only be the indirect result of inflation.

What to do before you lose it all

In closing here are some option on what you can do if you still have credit and a couple of dollars to invest.
I have talked on numerous occasion about gold, silver and precious metals and no I don’t think there is a bubble going on there. Gold and silver have been the back up global currency from before the days we had family names, and they will continue to remain our most trusted currency until we can retrieve metals from other galaxies that prove more durability and scarcity.

But there is another very interesting investment option moving up in the ranks, an option that would halt the real estate asset deflation and shore up home prices, as it is a program that not only could work; it would also save taxpayers money. (). The thought is based on:
1. Keeping distressed sales off the market (only offer them in the rental market)
2. Give loans to landlords in return for extended periods of rental commitments and
3. Keep the mortgage liquidity flowing by stabilizing the Underwriting rules which will create buyer confidence.

I wish I could say this solution was a fruit of my thinking but that credit goes to John Burns (http://www.realestateconsulting.com/content/our-proposed-rental-solution)

Keep in mind that if Washington politicians start seeing the cleverness of this plan, tax facilitation, cheap loans and stimulus will become available as if this thought were their own.

I do acknowledge the fact that the economies of the developed world are struggling and they will probably remain weak for several more years to come. I also accept the fact that the aggregate demand in all these troubled economies will stay well below the available capacity (output gap) only masked by “good” news announcement in the job market as more and more people got parttime (underemployed). It’s a fundamental shift caused by rapid population growth (80 million net growth globally per year), confusion in consumer demand and under developed distribution systems.

However, I also totally acknowledge the money-creation abilities of the central banks and the political need for avoiding complete chaos and rather than further destroying real estate capital in a downward deflationary spiral, I do firmly believe that the Federal Reserve and the European Central Bank will create unprecedented inflation instead.