Hands Across the Sand

Hands Across the Sand is a peaceful protest against offshore drilling. Amelia Island residents are planning to participate! 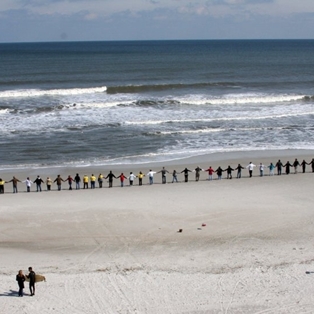 Hands Across the Sand, Image by: Maggie Fitzroy, The times-Union

Hands Across the Sand is a peaceful protest against offshore drilling. Amelia Island residents are planning to participate and we will share additional details when we hear from the local organizer!

FOR IMMEDIATE RELEASE: – Hands Across the Sand is now international. Any person in any country may plan events on the handsacrossthesand.org website. This is a peaceful gathering of the people of America and the world. Planning an event is as simple as this:
– Go to your beach on June 26 at 11 AM in your time zone.
– Form lines in the sand and at 12:00, join hands.

The image is powerful, the message is simple. NO to Offshore Oil Drilling, YES to Clean Energy.

On Saturday, June 26, Americans and the people of the world in solidarity events will join hands on beaches and in parks and cities united against the dangers offshore oil drilling present to our oceans and marine wildlife, fishing industries and coastal economies, in Hands Across The Sand.

Hands Across the Sand

Hands Across The Sand’s mission is to change our energy policy away from its dependence on fossil fuels and into the light of clean energy. The aim is to convince our leaders to abandon expanded offshore oil drilling and adopt policies that encourage clean and renewable energy sources.

“The image is powerful, the message simple,” said event founder Dave Rauschkolb. “No to offshore oil drilling, yes to clean energy. We are drawing a line in the sand against offshore oil drilling along America’s beaches and in solidarity events across America and around the world. No one industry should be able to place entire coastal economies and marine environments at risk with dangerous, dirty mistakes.” 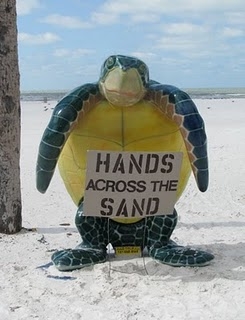 Hands Across The Sand was founded by Dave Rauschkolb in October of 2009. He organized a statewide gathering on February 13, 2010, to send a message to Florida’s legislators and Governor Crist that Floridians did not want them to lift the bans on near and offshore oil drilling in Florida’s waters. Thousands of Floridians representing 60 towns and cities and over 90 beaches joined hands to protest the efforts by the Florida Legislature and the US Congress to lift the ban on oil drilling in the near and off shores of Florida. Thousands joined hands from Jacksonville to Miami Beach and Key West to Pensacola Beach. The lifting of the near shore ban would have brought oil rigs as close as 3 miles from Florida’s shores. Shortly after the event the Florida Legislature tabled the effort.

It is simple. Any person can go to the handsacrossthesand.org website and sign up to organize a beach or city. Downloadable tools are also available on the website: free posters, T-shirt designs and newspaper ads.

Dave Rauschkolb is a surfer and the owner of 3 restaurants on the beach in Seaside, Florida, located on the northern Gulf Coast between Pensacola and Panama City.