Long influenced by small town politics, the Commission and City are working to move past that model; can they? 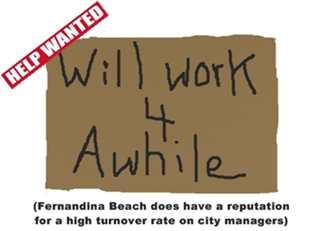 Job posting found on the City of Fernandina Beach website for a new City Manager. A better job description should include some of the 1998 Dr. Lance deHaven-Smith report. The more things change, the more they seem to stay the same.

City of Fernandina Beach Job Posting – City Manager, City of Fernandina Beach (population 11,500 year round, 18,000 during seasonal periods). This historic, city located on the northernmost barrier island in Florida has a rich cultural history and is home to a vibrant historic district characterized by numerous shops, attractive bed and breakfasts, city marina, many fine restaurants, restored homes and numerous historical buildings. Located on Amelia Island approximately 25 miles outside Jacksonville, Fernandina Beach covers 11 square miles and is a home to a cosmopolitan community of friendly people and hometown pride. Its pleasant climate and outstanding beaches have long made it a highly desirable tourist destination. The City’s early industry, however, was based primarily on shrimping, paper and lumber. Demographically, the population is divided approximately equally between those under 25, those between 25 and 45 and those over 45. Approximately 20% are minority.

Fernandina Beach is a full service city and then some. It provides all the typical government services including a water and sewer utility, but also operates a small general aviation airport, a 27-hole golf course and a marina. The golf course and marina are operated under management contracts. The General Fund budget is $14.6 million with a Capital budget of $5.2 million and a total budget of $44.5 million. The City has approximately 200 FTEs and three bargaining units (police, fire and crafts).

The City was incorporated in 1825 and operates by charter under a “Council-Manager” form of government. The City Commission is composed of the Mayor-Commissioner and four Commissioners all of whom are elected to at-large seats. The City Manager, City Clerk and City Attorney are hired by the City Commission and serve at their will. The Commissioners serve staggered three-year terms with an election every year in November. In the 2012 election, two seats will be open. Long influenced by small town politics, the Commission and City are working to move past that model. While the Commissioners do not agree on everything and frequently have strong opinions, they are consistent in their belief that the quality of life in their community is important; they are fiscally conservative and committed to tax minimization. They do take an active interest in the City’s day-to-day operations but allow the Manager to do his/her job.

The City is looking for a progressive and visionary leader who can work collaboratively with the Commission and staff to continue to enrich services offered to constituents in a tax effective manner. The ideal candidate will have a bachelor’s or advanced degree, five years of progressively more responsible municipal management experience in a coastal community of at least 5,000, and have ICMA Credentialed status. He/she will have a track record of achievement, creativity and integrity. Past experience must demonstrate a high level of successful performance in areas that include: fiscal management; redevelopment/economic development; strategic planning and implementation of strategic plans; team building and employee development; public communications and building community consensus; as well as fostering positive working relationships with other local, state and federal governmental units.

He/she will recognize the importance of the business community and understand its role as an economic engine in a tourist-oriented community. Salary will be dependent upon qualifications.

Submit letter of application, detailed resume with salary history and five work-related references to the City Clerk, Mrs. Mary Mercer (mmercer@fblf.org) to be received on or before March 30, 2012. Questions should be addressed to Mrs. Mercer at (904) 277-7305. Under the Florida Public Records Act, all applications are subject to public disclosure.

The City of Fernandina Beach is an Equal Opportunity Employer/Drug Free Workplace. Veteran’s preference will be awarded under applicable Florida law. Residency in the City is required within 30 days of contract signing. More information about this position, letter of application and the profile of the City can be found at the City’s website at www.fbfl.us/jobs.aspx.