One economic theory tells to throw money and spending against against a recession, the other says svae and be frugal until balance is achieved again. The choice defines the long term economy. 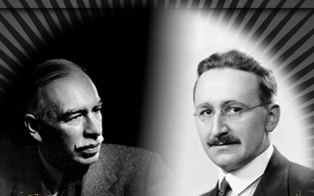 Today is the day the Obama administration is supposed to present their annual government budget and it already has leaked sufficiently that Obama’s current position is that “cutting the government budgets” is just as important to the economy as job growth.

This stance is of course a little late in the game after we’re looking at trillions of unearned dollars spent in stimulus and bailout programs that have so far produced little evidence of recovery, except maybe for bankers.

Many people are wondering which way to turn as the information that comes from Washington and Wall Street grossly contradicts the information coming from Main Street. Without wanting to add to this confusion, I though it might be funny to alert you to this video produced by a creative economics professor and a TV producer that published on their website http://econstories.tv a very funny expose of the main conflicting economic theories that are currently at play. One is the Keynesian theory of excessive government spending in economic tough times and the other is the Hayek (Austrian) theory of frugality and savings before you can invest.