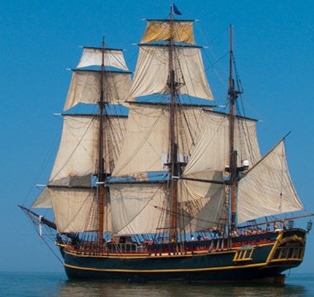 St. Augustine, FL — The tale of the H.M.S. Bounty is perhaps one of the most infamous tales of mutiny on the high seas. And pirates in St. Augustine have become the stuff of legend.

This month, the two join forces for Pirates on the Bounty, an action-packed weekend of pirates and privateers in the Nation’s Oldest City, presented April 28 through 29 in conjunction with the St. Augustine Pirate & Treasure Museum and the St. Augustine 450th Commemoration.

A joint and discounted ticket to tour the H.M.S. Bounty and The Pirate Museum will be available at The Pirate Museum and on the museum website: www.thepiratemuseum.com. The ship will be open for tours on April 27 through 29 from 10 a.m. to 6 p.m.; the museum is open throughout the weekend from 9 a.m. to 8 p.m. daily.

Known for the storied 1789 mutiny in Tahiti aboard the historic vessel, the current Bounty replica scheduled to sail into St. Augustine for the first time in history was built for the 1962 movie Mutiny on the Bounty with Marlon Brando, and has appeared in documentaries and films like Pirates of the Caribbean: Dead Man’s Chest.

“This city is so rich in history,” said Tracie Simonin, director of the H.M.S. Bounty. “The Bounty has never been to St Augustine before and I like to bring the ship to new and interesting cities.”

The H.M.S. Bounty sails the country offering dockside tours on the history of sailing vessels from a lost and romanticized period in maritime history. And it will lend its towering presence to Pirates on the Bounty.

“This is a great opportunity to provide the community with a first-time, hands-on historic experience that ties in with its rich maritime and pirate history,” said Dana Ste. Claire, St. Augustine’s director of heritage tourism and historic preservation, and director of development for the St. Augustine 450th Commemoration.

Tours of the world-famous tall ship will kick off at the St. Augustine Municipal Marina at 111 Avenida Menendez. The Pirate Museum is located within short walking distance from the marina at 12 S. Castillo Drive, just opposite the Castillo de San Marcos.

“Mutineers and pirates are the perfect combination, especially for St. Augustine where centuries ago tall ships sailed in and pirates pillaged,” said Pat Croce, celebrity founder of The Pirate Museum and renowned pirate historian.

Opened in December 2010, the St. Augustine Pirate & Treasure Museum features one of the world’s largest collections of authentic pirate artifacts, Florida shipwreck treasures and interactive fun, including the world’s only pirate treasure chest and Disney Imagineer-designed audio show. It was named a top national attraction by Budget Travel magazine.

“We’re excited to be a part of such an amazing weekend of pirates,” said museum executive director Cindy Stavely.