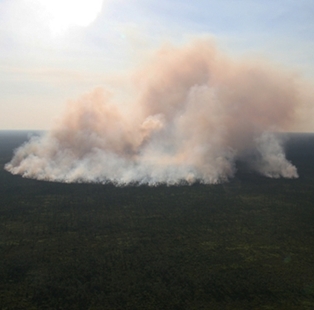 South Georgia fires have been giving Fernandina Beach residents smoke filtered sunsets and swamp ash on their cars. On April 28th, a lightning strike set off the Honey Prairie Fire in the southwest portion of the Okefenokee National Wildlife Refuge. The Georgia Forestry Commission posted the following media release on Sunday:

With Saturdays predicted wind shift from the Northwest to Southwest, the Honey Prairie Fire grew another 5,000 acres to new total of 44,000 acres. As a precaution, all day use boating and boat tours from the Suwannee Canal Recreation Area at the refuge’s east entrance, are temporarily suspended.

The Swamp island drive was closed yesterday and will be closed today to allow Firefighters to install waterlines to protect the boardwalk and viewing platforms. Swamp Island Drive will be reopened when these protective measures are completed. The boardwalk will remain closed.

In response to the wind shift and increased fire activity firefighting resources were redeployed to the East side of the Refuge to reinforce fire and control lines in the uplands.

If you are planning a visit to the refuge, call the Visitor Center at 912-496-7836 or visit www.fws.gov/okefenokee for the latest fire information. Fire photos and videos are posted on the Okefenokee National Wildlife Refuge Facebook page.

Motorists traveling through the area to the east of the refuge are cautioned to be extra vigilant due to the threat of smoke on the road. Georgia highways in and around Folkston and extending eastward into Camden and Glenn County could be affected. Driving these roads between sunset and sunrise is of particular concern because the smoke tends to settle near ground level which can impact visibility. Motorists are also cautioned to be aware of increased activity by fire suppression equipment.