How Large or Big is a Billion

By now everything is kind of too big to fail until it falls apart, because that....it will 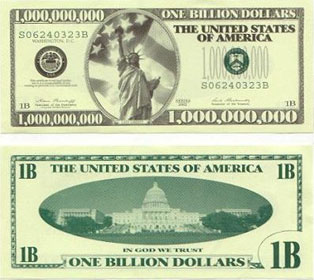 A Billion is one thousand million

I think we are all deluged with emails daily.¬† Some of them I keep but I do delete a vast majority of them.¬† I do this because for the most part, I simply don’t have the luxury of time to go through them and some of them I feel are just from another planet and don’t deserve reading.¬† From time to time however I run into one that I take a glance at and it catches my attention.¬† I received an email from a friend and it was actually interesting enough that I wanted to share the details with you.

We hear on the news everyday how our government throws around the word “billion” like it was just pocket change.¬† I guess in the large scheme of things, to them it is only a few dollars.¬† Do we really understand just how big a billion is?¬† If we think about it and put it in a perspective of time rather then money it would look something like this;

B.¬† A billion minutes ago Jesus was alive.

C.¬† A billion hours ago our ancestors were living in the stone age.

D.¬† A billion days ago no one walked on the face of the earth on two feet.

E.¬† A billion dollars ago was only 8 hrs. and 20 minutes at the rate our government is spending.

Thinking of it in time rather then money makes a huge difference doesn’t it?¬† So where does all this money come from?¬† You and I supply it in the form or taxes.¬† Let’s take a look at some of the taxes we are faced with on a daily basis.

The email went on to say that not one of these taxes existed one hundred years ago.¬† Our nation was the most prosperous in the world and we had no national debt.¬† We had the largest middle class in the world and Mom stayed home to raise the children.¬† So what happened?¬† Why are we now drowning in a sea of debt and throwing billions of dollars around like it was nothing?¬† Could it be we are just out of control in Washington?¬† I think the root of all this spending is not on the Presidents desk, but in the middle of Congress.¬† If we the people would limit the term in Congress to just eight years I think we would see all this spending come to an end.¬† The politicians who stay in Congress term after term are really buying their way back in, it’s called bringing home the bacon.¬† The only problem is the bacon is coming right off the backs of you and I.

It’s funny when you think about it.¬† We fought to leave British rule because of too many taxes.¬† Now I haven’t done the math to make sure the information in the email is correct, but I an assuming it is.¬† At any rate it is something to think about.

And to think we fought to leave British rule¬†to avoid so¬†many taxes.