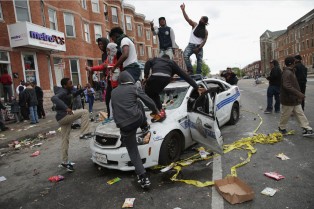 Takers on the Loose

The world has always been divided into Givers and Takers. Obviously I’m talking about ideology rather than economics here, but the consequences are rapidly turning into a daily diet of violent controversy.
Last week’s chapter happened in Baltimore and while the pundits and politicians were trying to lay blame in two ideological divergent ways; one blamed society and the other blames the rioters, it should be abundantly clear that neither position is going to give a solution, if there is one this late in the game.
The angle of the Whitehouse is predictable and overused: as in we need more education, more jobs, more opportunities etc. Politician’s favorites since time began.
The other major view lays the blame legally and morally with the rioters, even though this has not produced any workable solutions since I was a rioter myself in the turbulent sixties.; heart in the right place, justice embroidered on my forehead but completely ignorant of the fact that the human race will ALWAYS adopt the Nanny State first as their direction for the future, given the choice and the chance. And by God, the choice and chance is overwhelmingly in favor of the TAKERS.

So let’s analyze who should be identified as a Taker. A taker always seeks to profit from the benefits of social programs created as political ammunition. You can “buy” my vote for a price. Takers do not just show up out of nowhere; they are paid, and often paid well, to become Takers. They often advance over many years of social programming into positions of acquired wealth and even importance. Obviously Takers are not limited to rioters and crack dealers. They include administrators, bureaucrats, housing officials, certain politicians, non-profit institutions that carry payrolls, do-gooders with public money etc. etc. I’m not saying  it’s all wrong, because it’s not. But to understand the term Takers, these are people that do not produce anything that contributes to the economy of the land. They take and consume. They are the reason that 70% of the US economy floats on consumption rather than production. But that’s a story for another time.

Here is a not-so hypothetical example of a young urban man in today’s day and age, contemplating the future. He can go and apply for a job or two, work six days a week or even seven to make ends meet, apply for a mortgage and do the old fashioned thing of proposing to a girl, raising a family and work hard to get ahead in life…

or he can follow these easy, proven 13 steps to financial well-being…

This plan is perfectly legal and is being executed now by millions of people.

In contrast, a married couple with a stay-at-home mom yields $0.00 dollars.

I admit that I haven’t verified the exact details above… But I’m betting that the numbers are correct… $75,000 a year a lot of money to many people.
It’s also a (possibly partial) explanation why so many show up to riot, as they have nothing better to do.

In Baltimore one out of three residents eats at someone else’s expense; 35% get food stamps. Over 85% of the kids in school get free breakfasts and lunches at school. And more than 6 out of 10 residents get some form of government support.
Of the working-age population, more than 4 out of 10 are jobless. This number is five times the official “unemployment rate.” Which just shows how worthless the statistics are. For young black men between 20 and 24, the real unemployment rate is about 60% and in some neighborhoods it is 100%.

These are the people who went on a rampage last week – Takers bought and paid for with half a century of taxpayers’ money.
Not a pretty picture, especially not when we realize that the real big money is still not in food stamps and disability.

The big money is on Wall Street and in Northern Virginia. That’s where the Takers wear suits. More about that later.