How to Make Fig Wine

brew, do it yourself, fig, home, how to, make, wine, yeast 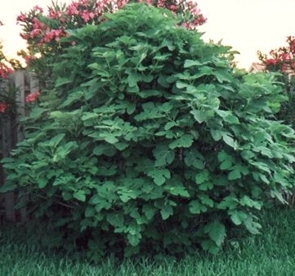 It all started with an abundance of fresh figs. We did not want to make preserves or have a freezer full of cobbler, so as we decided what to do with the figs someone called out, ‚ÄúNow, I‚Äôm not a fig plucker, nor a fig plucker‚Äôs son, but I‚Äôll pluck the figs until the fig plucker comes.‚Äù This rhyme is from a drinking game we like to play late at night around the campfire while ‚Äúroughing it‚Äù with our closest friends. So we giggled about the game, made ourselves a drink and decided to make fig wine. Two Saturdays in a row were spent plucking figs. 30 pounds of figs were plucked and stored in the deep freeze until we were ready to begin.

We made ourselves a cocktail and separated the figs into two, five gallon buckets adding just enough water to cover up the fruit. Camden tablets were added to kill the natural or wild yeast and the buckets were covered. We made another round of drinks and decided to allow the figs to marinate in their own juices for a couple of days.
Two days later, my father arrived with his boxes of wine making goodies. After pouring a round of drinks, we pulled out our equipment boxes, too, and began sterilizing all of the equipment we would need for the evening with a product called Brewer‚Äôs Edge‚Ñ¢, a brewing cleanser with chlorine. We would need to dissolve a large amount of sugar so we put a large pot of water on the stove to boil. Using two 6-Gallon containers, we added nine pounds of sugar to each of the vats. We made another round of drinks and waited for the water to become hot enough to dissolve the sugar , then added half of the hot water to each of the containers. Using a sterile spoon we stirred the sugar water until it was clear. We waited for the sugar water to cool before proceeding to the next steps. Once the water had cooled we added ¬Ω tsp of tannic acid into each vat. Oak wood is rich in tannic acid and when wine is kept in oak kegs it helps color the water slightly and improves the yeast‚Äôs performance. We didn‚Äôt have original oak kegs, we had large plastic containers, so we added the tannic. ¬º tsp. of acid blend was added per batch, to adjust the acidity in making a fruit wine. 1/8 tsp per Gallon of a liquid pectic enzyme was added to each container to help extract the juices from the fruit and to keep the wine clear, not cloudy. Also, we added 2 TBLS of yeast nutrient per container. The yeast nutrient feeds the yeast, permitting the yeast to do a better job. We added the fruit and the marinade from the original two five gallon buckets into the new six gallon containers. Only filling our vats to the five gallon mark, we wanted to leave plenty of room at the top for the fruit to ferment. 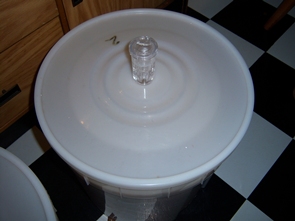 Finally, on top of each of our batches we sprinkled one, five gram packet of yeast over the mixture and lightly pressed the yeast into the floating fruit, being very careful not to stir. Yeast eats the sugar, converting it to alcohol and the yeast nutrient helps the yeast do a better job, as the tannin did. Home brewing results will always vary slightly, but using brand name yeast is worth the extra expense. NEVER add the yeast to hot water. Quickly seal and lock the containers. Fill the air lock about ¬Ω full of water, this serves as a one-way valve permitting carbon dioxide gases to escape but eliminating outside influences from entering.

During the first couple of days we watched the air gap at the top of the containers. If the air lock bubbled too vigorously, we would need to skim off some of the excess foam right away. Outside contaminates, and even oxygen is not conducive to wine making, it will turn your wine into unfavorable results. If at anytime should your concoction turn green, you are advised to call Ghostbusters ‚Äì otherwise, let it cook for about a week or so, until the bubbling inside the air lock slows down! Stay tuned‚Ä¶