Hurricane Irene to the Rescue of the Economy?

Praying for a hurricane to hit is a new twist in the fight to turn the economy around. But hoping for an alien invasion..? Really? 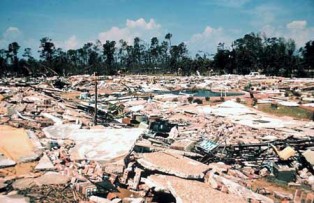 It is a strange world when front page news about global markets, economy, credit crunches, wacky Washington and an extended recession makes space for the potential hit of a Hurricane. But that’s exactly what we’re seeing today. Hurricane Irene, just a minimal category 1 pummeled Puerto Rico a bit last night and immediately the media focus shifted to prediction where she would be heading.

People in Texas are holding prayer meetings to beg Irene to take a curve to the South and drench their dried out land, while Florida wouldn’t mind some downpours either. As one that has gone through five major hurricanes in the past 22 years (two category 3’s, 1 category four and 2 category 5’s) I have a love/hate relationship with these giant storms. While their tempestuous strength destroys everything in its way and leaves misery in its slipstream, I cannot deny that the aftermath has always been financially rather good to me.

Rebuilding after a destructive storm usually reinforces relationships, tolerance and cooperation, provided there is good leadership and organization. Most people immediately accept that drastically limited resources needs to be shared in a more equal fashion and survival becomes a matter of strengthening the weakest links in the chain, by appointing adequate tasks. I can say this because all my experiences with hurricanes happened in the Caribbean Islands, which is quite a different experience than herein the States. When airports and seaports are destroyed and planes nor cargo ships can come to the rescue for a while, an island has to live with whatever resources are left behind by the storm. That’s it…until some type of normalcy is established.
To make the point, if a storm hits the US Coastline, there is still a Walmart, Home Depot, Lowe’s, Publix within reasonable distance of the impact, that can re-supply the targeted area.

Islands do not have the luxury of what is coined Resource Nationalism, a term used to describe the tendency of people and governments to assert control over natural resources located on their territory. They are one-legged economies based on tourism with very little playing room. They do not have the luxury of playing politics after a hurricane destroys their immediate livelihood. They have to share fairly in what is left and build back from there.

The reason why I bring this up is because Nobel laureate economist Paul Krugman, economic advisor to our president just came up with another wacko solution to the economy. Krugman says that America needs a fake alien invasion to mobilize the economy. Yep you read that correctly. Supposedly everything would be back to normal – just like in WWII. Of course there are those who say that Krugman is just joking, but considering his Keynesian theories created the foundation to our national debt crisis as a result of huge bailouts and trillion dollar stimulus plans, I would wanna know where the man gets his drugs from.

Whether hurricane Irene is going to bring some regional “relief” or the Dow decided to go up 37 points today, because after all it’s Monday, Obama is looking at plummeting approval ratings on the economy – from 37% down to 26%. Not a lot of platform left there.
It seems that Americans are so boggled down with daily life, that they have accepted in some way that the Dow Jones represents the the economic scoreboard, the pulse of the economy. They have no clue about the daily manipulations the markets go through, executed by professionals with powerful computer softwares, that have nothing in common with economic reality. We have known the term “jobless recovery” for the better part of 2 years now, surely a sign that we never were in a recovery – outside of the stockmarket manipulations at least. But consumer confidence based on casino economics, offered the experts enough ammunition to declare the recession over a long while back.

If that were true than someone explain to me why, even though the market went up a bit today, gold went up even more. Gold is apparently no longer “just a flight to safety” considering that the traditional picture portrays that when the market goes up, gold goes down and vice versa. Not today however. The DJIA went up and gold almost broke the $1,900 per ounce mark. That’s a whole other story in itself.

I guess I need to go buy some plywood, just in case Irene ignores all those pleas from Texas and decides to pay us a visit here in Florida.