I really need to stop saying, “How stupid can you be?”

Subtract all increased government spending from the data and the GDP stayed exactly the same. How 'bout them apples? 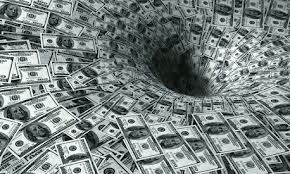 Federal Feeding of the Financial Vortex to the Black Hole

The more I think “How Stupid Can You Be?”, the more I think some people are starting to take it as a personal challenge. Especially considering the economic ignorance that media have surrounded themselves with.

Why this rant? Because I’m so fed up with the media practice to create uneducated headlines anchored in willful ignorance, spiced and seasoned with pliable statistics and numbers they have no clue about how to interpret correctly. And this assertion is being nice, because I can easily go the other way and accuse them of being inflammatory partisan and steering elections. Oh no, could it be…?
Here is today’s headline I am talking about:

US economic growth improves to 2 pct. rate in Q3

What does this headline mean to you and do you take away from it that the economy is improving?

In our fast paced world with little time and often less understanding of economic intricacies, you may take this headline as something positive and conclude that maybe Obama needs a bit more time to make it all happen. Well by taking some layers of obscurity away, the reasons for this almost insignificant economic pick up is in reality anchored in the Keynesian principle of massive consumption and government spending during recessions. Actually I will show you that the “heralded” economic pick up is a scam of massaging the statistics and interpretations.

We have been fighting this politicizing of the economy process since the bottom dropped out under our economy in 2008, yet the White House still considers it credo and the right thing to do. Young and inexperienced media reporters fall for it time and again, and the result is that Headlines become the News, and the headline writer is usually the dumbest one in the bunch, who glances at the story, and without understanding the majority words a headline people on the street will take as the news. It’s scary how easy news can be manipulated these days.

But the reality behind the above headline is this:

1. All numbers and statistics come from the Bureau of Labor Statistics and the Commerce Department, two government institutions who are known to massage the numbers every month.
2. We know first hand that Economic Growth is anemic and trails last year’s meager 1.8% by an even measlier 0.06% (clutter in the margins)
3. The “growth” in the headline is partly attributed to a moderate growth in consumer spending. Turns out that this spending was fueled by auto sales (loans) and back to school credit card sales. Not much real fuel or longterm indicator to the end of a sluggish economy.
4. The accredited spending increase in the housing sector improvement is majorly a result of loan related home improvements and seasonal construction timing. The moment winter hits, this growth will drop like a hot coal from a carpenter’s hands. Another consideration should be that a 14% increase in housing spending (which only contributes 3% to GDP) comes from 5 years of market contraction to less than half the size it was before the financial crisis. In addition many potential home improvers are also applying for box store credit cards and both Lowe’s and Home Depot are reporting that their credit card sales are exponentially growing.

And then last but not least The Federal Government conveniently decided to sharply increase defense spending by no less than 13%. Actually this was the largest increase in 3 years. Do you sense the irony in this charade this close to the elections?

So did the Economy grow in the third quarter?

Subtract all increased government spending from these data and the GDP stayed exactly the same. How ’bout them apples?

No doubt the Obama campaign will quickly politicize the “improved” economy and crow about this “uptick” in GDP improvement, especially since the mediocre media reporting will only produce headlines that mislead and fool many in the electorate.
Now I’m not saying that the Republicrats have a better grip on reality than the Demopublicans, but overriding reality is that if we don’t bury Keynes’ Spending Doctrines quickly and get spending under control and lower, businesses will keep cutting back on investments and investors, local and foreign, will stop buying US paper and demand repayment of outstanding debts in a currency/value that will not be debased and devalued out of existence. But in the meantime count on unemployment to stay high for years to come.
And that my dear friends is the real story behind a massively deceiving headline this morning.